Joe Dukes is one of the quintessential organ combo drummers in the history of jazz. A master of the greasy, syncopated backbeat, Dukes was a precursor to many of today’s top-notch drummers like Steve Jordan, who owe debt to Dukes when they get down to the nitty-gritty of jazz funk drumming. 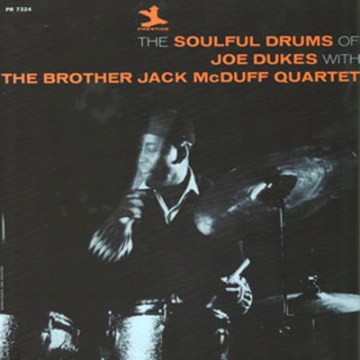 
Dukes was born in Memphis, Tennessee. He spent the major part of his career in organist Jack McDuff’s quartet. It included the new brilliant kid on the block George Benson and smoky tenorist Red Holloway and is, arguably, McDuff’s hottest group of all time. Prestige boss Bob Weinstock was equally impressed. Weinstock and McDuff agreed on granting each member a leadership date. Red Holloway’s Cookin’ Together and George Benson’s The New Boss Guitar were followed by The Soulful Drums Of Joe Dukes. It’s the only album of Joe Dukes as a leader. There are no known recordings involving Dukes after 1970. Dukes passed away in 1992.

Dukes isn’t involved in an ego trip but instead limits himself to solo’s backed by the band. When displayed in basic, slow blues riffs like Soulful Drums and Moohah The DJ, these solo’s are more gutsy than suave and have a good groove. There’s a great moment at about three minutes into Soulful Drums, (listen here) when the quartet veirs into double time like a wild bunch of libertine torpedos.

The highlights of the album concern Dukes’ usual business of effective, hi-voltage group support. Dukes goes charmingly berserk on the uptempo, Afro-Cuban-ish My Three Sons. (Does tune scribler McDuff refer to His Three Beloved Bandmembers?) Everything a funky organ combo needs is laid out by Dukes: a ‘pocket’ of a rock solid hi-hat and bass kick as a touchstone for the organist and group; announcements of new solo’s and choruses and different tune sections by a variation of effective fills and turnarounds; and an inspired amount of pushing and pulling of the soloists. The great thing about Joe Dukes is that he not only displays elemental organ jazz drumming, but adds alluring extras like (Art Blakey-like) single-stroke rolls. Clearly, the man had jazz drum history running through his blood. In My Three Sons, George Benson’s quicksilver runs are crazy! At the start of his career, Benson is eager as a fox on the loose, trying to meaningfully incorporate all his fast-fingered blues chops in a jazz context.

Joe Dukes’ art of organ jazz drumming can be found on numerous McDuff albums. Live! (Prestige, 1963) and Hot Barbecue (Prestige, 1965) are essential. Dukes also recorded with Hank Crawford, Lou Donaldson and Lonnie Smith. Smith’s Live At Club Mozambique (Blue Note, 1970/1995) is another album on which Dukes is particularly stunning. Note on the liner notes of The Soulful Drums: isn’t it a bit weird that, on an album dedicated to the group’s drummer, most of the back cover info deals with the career history of Brother Jack McDuff? Assumingly, listeners would’ve liked to hear more about the relatively unknown Joe Dukes. I would’ve liked to have more biographical info!

That said, praised be Weinstock for providing us with Dukes’ delicious, greasy organ jazz goody.