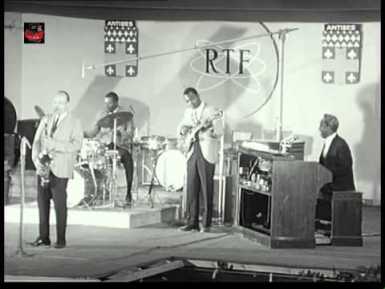 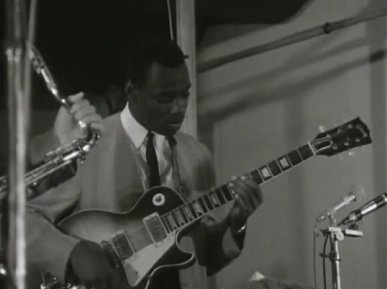 A while ago, a friend sent me this fantastic footage on YouTube of organist Brother Jack McDuff at the Antibes Festival in France in 1964. At the time, Jack McDuff’s quartet consisted of tenor saxophonist Red Holloway, guitarist George Benson and drummer Joe Dukes. (Read the recent review of The Soulful Drums Of Joe Dukes here)

The popular organists of the sixties, like Jack McDuff, Jimmy Smith and Jimmy McGriff were both true entertainers and true musicians. They entertained but not with cheap tricks. If you played with cats like that, you had to have game. In his autobiography, George Benson tells a number of exciting and insightful stories about his time with McDuff.

Benson joined McDuff in 1963. It was his first break. Benson was still basically an r&b guitarist, dreaming of the high standard of his predecessors in McDuff’s group, Grant Green, Eddie Diehl and Kenny Burrell, but as McDuff would soon acknowledge, a ‘baaaaaad’ picker. Benson slowly but surely developed into a jazz player, absorbing the music of Art Blakey’s Jazz Messengers on the road, who traveled the same circuit. Plenty time to learn, because McDuff’s quartet was playing nightly for two years time around the East Coast and Mid-West.

By 1964, the group fired on all cylinders. McDuff and Joe Dukes were excellent teachers but tough customers. McDuff regularly shouted obscenities to Benson on stage, ‘if he had just the right (or wrong) amount of booze or weed.’ Joe Dukes, ‘such a magnificent drummer that there were times I thought he was one of the greatest things that ever happened to mankind’ was especially hard on the 19-year old prodigy, who alledgedly picked up too many girls for the taste of the envious drummer.

“Finally, after a particularly nasty rant, I snapped: ‘If y’all don’t lay off, I’m gonna take y’all outside and beat y’all old men up! I’m nineteen years old! Y’all can’t take me! We’re going out in the alley, right now! McDuff and Dukes just stared at me for a second, then they both pulled out switchblades. But that didn’t stop me: “I don’t care! Y’all don’t scare me! Bring your switchblades into the alley! I’ll beat y’all up anyhow!” Fortunately, cooler heads prevailed: nobody went into the alley, and nobody got beaten up. But it got them off my back.”

“In retrospect, I’m glad they stayed on my back; granted, their methods were barbaric, but for the most part, it was about making me a better musician so we’d be a better band.”