Of the popular jazz funk dates alto saxophonist Lou Donaldson did in the late sixties, Midnight Creeper is one of the best. It’s a driving date involving a mellow-blowing leader among a bunch of talented sidemen that were becoming successful leaders in their own right. 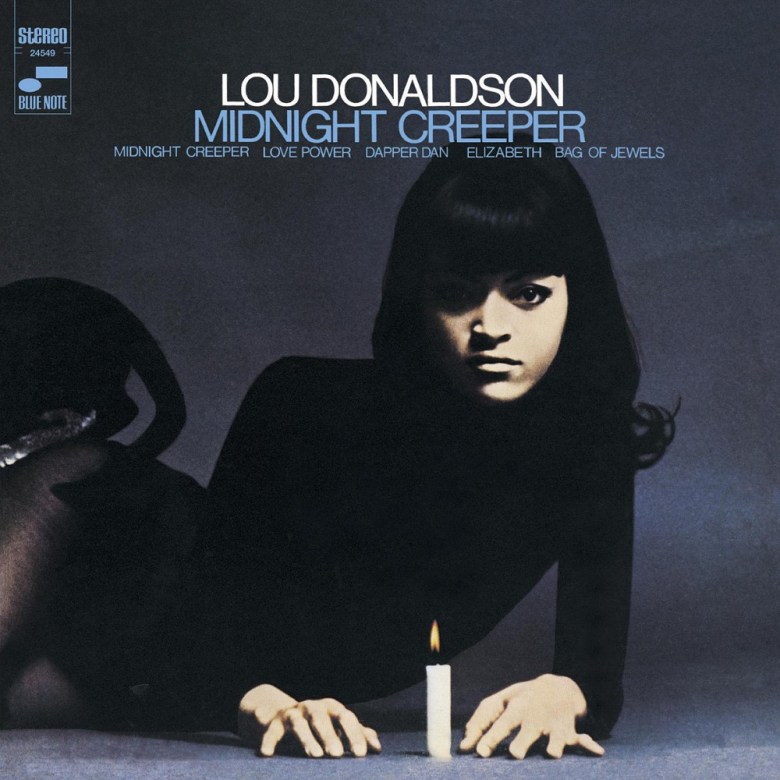 Side A:
Midnight Creeper
Love Power
Elizabeth
Side B:
Bag Of Jewels
Dapper Dan


Veteran Donaldson, who was influenced, as many or most were, by Charlie Parker and whose cooperations with Thelonious Monk, Art Blakey and Jimmy Smith date back to the late forties and early/mid-fifties, had a good hand in picking new breed cats in his mid-sixties soul jazz and late-sixties/early seventies jazz funk heyday. To name but a few: Grant Green, Big John Patton, Ben Dixon, Charles Earland, Melvin Sparks. The group of Midnight Creeper is of similar high standard.

One only has to take a listen to Bag Of Jewels to appreciate the rapport of George Benson & Co. The artistic merit of a simple vamp like this one, written by organist Lonnie Smith, lies in the protagonists’ groove-ability. The drive of the rhythm section of drummer Idris Muhammad (formerly Leo Morris) and Lonnie Smith is tremendous. The twangy chords of George Benson add body to the bottom. Lonnie Smith is a wholesale dealer in juicy funk and enigmatic surprises. Smith, on this album, shows that he had become one of the most original organists of his time.

The signature tune, Midnight Creeper, is an easy-going groove, a mellow boogaloo. The title and bounce suggest the nocturnal journey of a greasy cat, but for me that lazy gait ignites visions of old geezers in the park, scuffling around a chess board and glancing from under their Panama hats to attractive women passing by. That, of course, is one of the beauties of music, that it creates a variety of feelings.

Donaldson shines brightly on ballads, and Elisabeth is no exception. Not only does Donaldson have chops in abundance, his tone is warm and penetrating and the way Donaldson wraps his arms around the melody is breathtaking.

The funky beat of Love Power is irresistable. It has a kind of Bo Diddley twist as well. Lou Donaldson’s comments bring about a playful, calypso feeling. George Benson delivers a skilled r&b section, including bent strings and slurs. In short, the cover of Teddy Vann’s tune – recorded by The Sandpebbles in 1967 – is a spicy stew.

The album Midnight Creeper is an appetizing melting pot as well. Lou Donaldson’s commercial jazz funk albums, even if not all of them are up to par with Midnight Creeper, include classic groove tunes that, I’ve always felt, have the vital function of keeping jazz accessible for newcomers into the jazz realm. At least it worked like that for me as well as a number of teenage buddies in the mid-nineties. Donaldson reminded us of the blues and soul music we were passionately involved with. Midnight Creeper and Lou Donaldson’s other boogaloo gems spelled: wow, this is jazz as well! We’re enjoying the ‘far out’ Coltrane and Monk, but let’s get low, down & dirty for a change! Yeah, let’s just.