By January, 1961, when Grant Green’s debut as a leader Grant’s First Stand was released, Green was 26 years old and already a seasoned player. His debut is confident and chock full of suave blues. 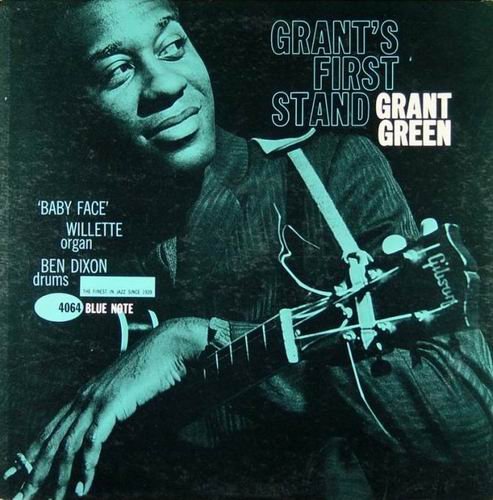 Side A:
Miss Ann’s Tempo
Lullaby Of The Leaves
Blues For Willareen
Side B:
Baby’s Minor Lope
’Tain’t Nobody’s Bizniss If I Do
A Wee Bit O’Green


Some colleagues and friends from the guitarist’s hometown, St. Louis, have said that before the time alto saxophonist Lou Donaldson secured him a deal at New York’s Blue Note headquarters in 1960, Green’s unique style was already intact. Musicians who traveled through the jazz and r&b-friendly East St. Louis also were enamoured of Green’s approach. Said drummer Al Harewood: “(…) before he got there, the club was packed. So Grant must have been doing something right. Oh, boy, it was swinging, swinging, swinging. He was fresh. (…) It was like a revival meeting. They well appreciated him, too. So did the fellas in New York, once they heard him.”

But was Green’s style really already fully-formed? Well, almost. It was mature, soulful, had a unique ring to it. But Green’s playing certainly underwent a few changes in the sixties. Playing in a variety of settings, with a roster of world-class young (and some older) lions, inspired Green to reach beyond his basic style in straight ahead as well as modal hard bop. Generally unbeatable and highly inventive, this period included career heights as Grandstand and Idle Moments. His funk period from the late sixties represented a direction into deep grooves and more percussive phrasing.

What they meant was that the core of Green’s style remained the same, whether the guitarist tackled gospel, Latin, modern jazz or blues music. Green’s unique assets are a lucid and round tone, fiery approach, melodic elan and abundant blues feeling. What those people who knew or met Green meant, was that Green was a man of the blues. Green felt very comfortable within the organ combo genre and made many fine recordings in it. After Green’s debut and initial side dates Green would become the most prolific musician in the Blue Note roster up to 1965. By 1962 Green had earned Downbeat Magazine’s New Star victory in the guitar category.

Miss Ann’s Tempo is an example of excellent trio work. The playful theme of ascending and descending notes stated by Green is supported well through answering chords by Willette and effective cymbal and tom work by Ben Dixon. Green’s solo has a natural flow and logical structure. Baby Face Willette’s statements consist of probing, funky lines and poignant, short notes stabbed at the keyboard with the infectious joy of a bird let loose from his cage.

In building the solo of Baby’s Minor Lope – as the title states and suggests, a minor key blues that runs steadily on – Green uses his trademark sustained tremelos that work as a breath of fresh air before traveling on vigorously. In between the beforementioned and other like-minded mid to uptempo tunes are two slow blues songs. One of the most popular and recorded blues standards, Ain’t Nobody’s Business, has a solid but a bit subdued Green solo. It might’ve something to do with Baby Face Willette, who burns through an in-your-face solo that is hard to surpass. Wee Bit O’Green fares better. The slight change of beat creates a loose and down-home atmosphere Green relishes.

After Green’s debut, there would be no question of a ‘Wee Bit O’Green”. ‘A Whole Lot O’Green” is more appropriate. In 1961 alone, Green would not only appear as leader or sideman on a staggering number of seventeen (including five posthumously released) Blue Note recordings, but also record as a sideman for Jazztime, Jazzland and Prestige.