Laying down a propulsive groove was Idris Muhammad’s specialty. Funk jazz galore on the drummer’s debut as a leader, Black Rhythm Revolution!. 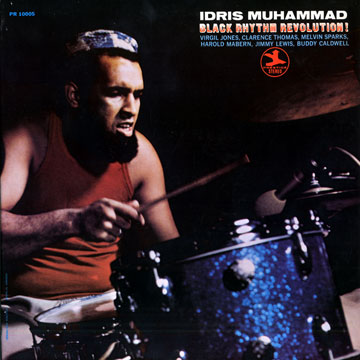 Side A:
Express Yourself
Soulful Drums
Superbad
Side B:
Wander
By The Red Sea


Idris Muhammad, formerly known as Leo Morris, wasn’t your average jazz drummer. To understand what Muhammad was about, it is best to describe him as a New Orleans drummer. It might not exactly explain why Muhammad became the penultimate jazz funkateer whose probing beat was a deciding factor in the artistic and commercial succes of the soul and funk jazz albums that rolled off the assembly line of Blue Note and Prestige in the late sixties and early seventies, which in my book comprise the lasting legacy of the drummer. But this way of looking at Muhammad does account for his versatility and eclectic career path.

Born in a family of brothers and a sister who all played drums, the young Leo Morris was fascinated by the Mardi Gras parades at an early age and would come to play professionally in marching bands at age nine. The Morris family was friends with the Neville family, that hardcore tribe of New Orleans Funk, and Leo was part of the Hawkettes, Art and Cyril Neville’s early incarnation of the legendary The Meters. Muhammad is the drummer on Fats Domino’s world-wide smash hit Blueberry Hill. At age sixteen! The promising drummer also gained experience performing and recording with Sam Cooke, Jerry Butler, Eddie Bo, Earl King, Lloyd Price, Larry Williams, King Curtis and Curtis Mayfield. Later in his career, Muhammad worked with Roberta Flack, George Benson and John Scofield. Nice resume, aye? Might not get you through math, but opens doors standing in front of St. Peter Of Soul.

It gets better. Jazz was a part of Muhammad’s upbringing early on, yet fully came to the fore during his stay in New York in the early sixties, when he gigged with Roland Kirk, Kenny Dorham, Freddie Hubbard and Lee Morgan. His meeting with Lou Donaldson was a game changer. Lou Donaldson’s recording of Alligator Boogaloo in 1967, with Idris Muhammad on drums, set a trend of funky jazz with a hip, solid beat to it. The rest, as they say, is funk jazz history. Muhammad – who had converted to the muslim faith in the mid-sixties, appeared on subsequent Lou Donaldson albums as Midnight Creeper and Everything I Play Is Funky, Rusty Bryant’s Soul Liberation, Grant Green’s Carryin’ On, Charles Earland’s Black Talk!, Lonnie Smith’s Turning Point and many more commercially and artistically viable funk jazz albums.

1974’s more slick Power Of Soul on Kudu turned Muhammad into a hit maker (the hit, Loran’s Dance, eventually was sampled by the Beastie Boys on Paul’s Boutique, in fact, Muhammad’s beats are all over the place in hiphop territory) and, to Muhammad’s astonishment, a disco king in the late seventies/early eighties. Simultaneously, Muhammad recorded prolifically and performed for years with adventurous contemporaries as Pharaoh Sanders (The B-side of Sanders’ 1968 album Jewels Of Thought, called Hum Allah Hum Allah Hum Allah gives you an idea of their mutual interests and passions…) and, later in life, the virtuosic and innovating pianist Ahmad Jamal. Muhammad passed away on July 29, 2014 at the age of seventy-four.

If not exactly a revolution – let’s just reserve that term for the drum innovations of Kenny Clarke that shifted the jazz landscape from swing to bop in the late forties – Muhammad’s drum style was an important force in the late sixties return of jazz to a danceable vibe. The momentum that Muhammad develops during the course of a tune is crazy. Also very striking are Muhammad’s resourceful and greasy rolls, pushing and pulling his bandmates into ambiences they were heretofore unacquainted with. The guys on Black Rhythm Revolution! are infected by the joyful motion of Muhammad, with no antidote in sight. It might lack a soloist with the flair and experience of Lou Donaldson, but trumpeter Virgil Jones, in particular, shines through as a lively, hot player. A tight-knit outfit, Muhammad, bassist Jimmy Lewis and pianist Harold Mabern – heard on electric piano here – turn in a luscious slow drag like Express Yourself, the basic blues line Soulful Drums, a vehicle for Muhammad’s gritty improvisations, and the roaring, uptempo mover Wander. James Brown’s Superbad is as baaaaadass as it can get. Black Rhythm Revolution! is a badass album and delicious proof of Idris Muhammad’s unique style of drumming.