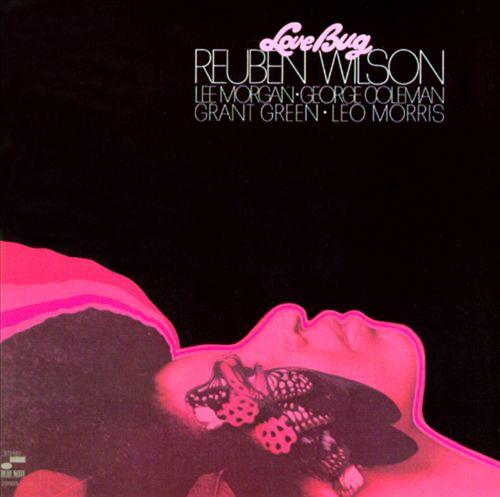 
Wilson’s debut for Blue Note half a year earlier, On Broadway, contained a mix of soul and tin pan alley. Follow-up Love Bug, including three long groove cuts and a danceable rendition of I Say A Little Prayer, puts the emphasis on pop and funk. In an interview in her book Grant Green: Rediscovering The Forgotten Genius Of Jazz Guitar, Sharon Andrews Green, the biography writer of guitarist Grant Green, Wilson said:

“See, I came up with this idea of playing pop music with jazz. I didn’t think they should be limited. In a lot of ways it had already been done, but not necessarily given the appreciation. They used a lot of jazz musicians in Motown. They were background players. So instead of having them in the background, it was just a matter of bringing them to the foreground. When I went to Grant with these things I wanted to do, he was just ecstatic. He was like: ‘Yeah, man. Let’s go. This is hip. Come on, Ru, let’s do this thing.’”

At which time the established team of sidemen came into the picture. Playing with the famous Lee Morgan and crew was a big deal for the organist, but Wilson is composed and authoritative. The way he embellishes the extra slow boogaloo Hot Rod with meandering phrases suggests a mind that’s intent on both logic and understated emotion. Sound-wise, Wilson is almost indistinguisable from fellow organist Lonnie Smith. As if Wilson borrowed his organ; the register and pitch are alike. His phrasing, however, is less flamboyant, more introverted. A minor complaint about Hot Rod: one could do without the drum solo near the end.

Otherwise, the bass-heavy back beat of Idris Muhammad is key to the irresistable charm of Love Bug. It’s there on the title track; an uptempo, sharp-as-a-tack threesome of snare, bass and hi-hat that puts you smack, dab, in the middle of a soulful groove and stimulates Wilson, Green, Coleman and Morgan to put their best foot forward. And on Back Out as well. It has a beat that resembles the beat of Spinning Wheel, the 1968 hit from Blood, Sweat & Tears. At the time, Blood, Sweat & Tears’ combination of jazz and rock raised quite a few eyebrows in the jazz community and led to a number of hot debates about the state of jazz in periodicals such as Downbeat Magazine. Apart from this, the beat that Wilson and Muhammad incorporated is effective and swinging.

Grant Green had interpreted some pop tunes on mid-sixties Blue Note albums, but the territory of funk, which he had been preoccupated with as a listener for some time, was fresh ground. After a troubling period wherein Green had disappeared out of the limelight, because of both a drug problem and a disappointment in the music business, Green sounds invigorated. Love Bug would stimulate Green to boost his career by delving deeper into funk, starting with Carryin’ On in October, 1969. Love Bug and Carryin’ On brought Green back into the Blue Note family. George Coleman is in particularly fine form; his playing is in the possession of both gutbucket feeling and complexity.

Reuben Wilson’s pop covers on Love Bug contain tight ensemble work and a lithe feeling. I’m Gonna Make You Love Me – a Gamble & Huff composition that was a hit for Dee Dee Warwick in 1966 and a smash hit in 1968 for the combination Supremes/Temptations – has a natural, irresistable flow. The laid-back comping of Wilson and smart combination of chords and strummed bass parts by Grant Green blends well together. George Coleman takes a lyrical, vocalised solo. Lee Morgan delivers a far from pedestrian bit, but his mind seems to be elsewhere and there are some bum notes. On the whole album, George Coleman is in better form than Morgan.

Burt Bacharach’s I Say A Little Prayer has a sunny feeling and bouncy vibe. It cooks with ease and boasts delicate phrases by Grant Green and understated, yet spirited statements by Reuben Wilson Stormy, a Classics IV hit from 1969, gets a nice Latin treatment.

Love Bug contains three deft and danceable excursions into the pop realm and three cookin’ funk originals by Reuben Wilson. It is proof organ jazz, as performed by the talented and knowledgable, was smart and groovy at the same time.