With obvious delight, pianist Laurence Fish guides his quintet through a lively market place of standards and originals on his debut album as a leader, Sen’s Fortress. 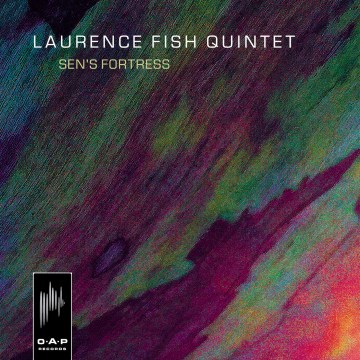 
The Hague has been the premier Dutch bop and hard bop city since the fifties and the town is still littered with places where musically gifted young and older cats meet. Such is the case with the musicians on this disc, who either have been associated with the Royal Conservatory or living in The Hague. The Laurence Fish Quintet, which includes the veteran Dutch drum hero Eric Ineke, delivers an excellent set of mainstream jazz.

Assumingly in sync with a gentle personality, the London-born, thirty-two years old Fish employs a lithe touch and works around the melodies with carefully crafted steps, adding creamy voicings and happy-go-lucky tremolos. A versatile stylist, Fish alternates a thoroughly swinging after hours rendition of Mercer Ellington’s old warhorse Things Ain’t What They Used To Be and the standard Love Is A Many Splendored Thing, which is marked by a sweet-tart conversation between altoist Tom van der Zaal and tenorist Caspar van Wijk, with moody ballads such as Mariposa, one of five compositions by Fish. The tune includes a lyrical contribution by trumpeter Nanouk Brassers, whose tone and delivery brings back memories of Art Farmer. And, as an astute marriage counselor, in his solo Laurence Fish seals a happy marriage between romance and ringing blue notes. Fish tastefully stretches out in Ghost Of A Change, another standard of this 59 minute set. A maximum of 45 minutes (the LP-format, I’m old-fashioned and I don’t mind it…) would, arguably, have more impact than the hour that fills the album, which, by the way, sounds remarkably transparent, spacious and warm.

Eric Ineke’s experience and expertise provides the glue that sticks together the various parts, providing spot-on accents and delicacy and fire proper for the occasion. His propulsive approach, which blends well with bassist Matheus Nicolaiewsky’s swift and firm bass playing, comes in handy during the uptempo original compositions by Fish that bring to mind the adventurous Blue Note recordings of the mid-sixties. Without a doubt, Fish writes a killer tune! Both the modal jazz-tinged Roam and Sen’s Fortress are complex but catchy themes, alluring riddles of tension, release and quixotic twists and turns, that offer a challenging canvas for the sidemen’s strokes. The outgoing Caspar van Wijk, occasionally attacking in the manner of Joe Henderson, tells a coherent story. Mildly contrasting, Tom van der Zaal’s statements are balanced but forceful. Both young saxophonists conjure up delicious phrases from the rich well of hard bop saxophone art. Besides presenting fine statements by Van der Zaal, Van Wijk and Fish, Second Time Lucky is a beautiful song that ignites a smile like cheerful classics such as Shiny Stockings.

Sen’s Fortress is a location in a computer game. Laurence Fish might play it as fanatically as your average high school kid, the pianist’s core business is making music with an enthusiastic nod to the tradition. It’s good news for fans of mainstream jazz if Fish would continue his path down the straight-ahead road, hopefully writing more avant-leaning compositions in the process.

Find Sen’s Fortress here. The album will be available on May 14.