I once saw Hot Barbecue, the 1965 album of popular organist “Brother” Jack McDuff, recommended as perfectly suitable as background music for a BBQ party. It wasn’t a joke. I thought it was hilarious. 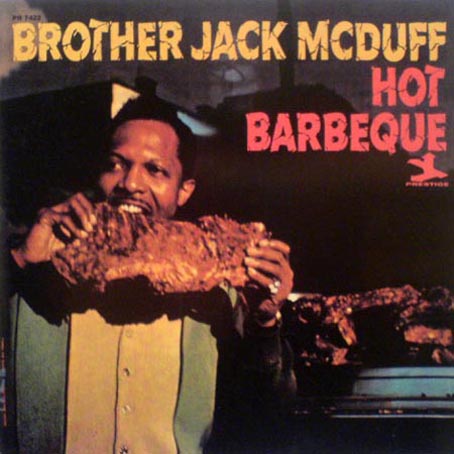 Side A:
Hot Barbecue
The Party’s Over
Briar Patch
Hippy Dip
Side B:
601 ½ North Popular
Cry Me A River
The Three Day Thang


Admittedly, Hot Barbecue is a party record. Try standing still in front of the grill. Virtually impossible. And that’s cool; indeed, the so-called BBQ-factor, or should we say danceability, is a profound aspect of jazz. On closer inspection, moreover, one cannot help but stumble upon a related, underlying level of profound meaning of the soul jazz McDuff brings: the fact that it is part of, and creates, a communal experience.

Something of a ‘working class hero of soul jazz’, Jack McDuff was always specifically intent on entertaining audience and listeners. Deeply rooted in both secular entertainment (profanity included) and church morals – that peculiar mix that lies at the heart of black culture – McDuff was the kind of guy who is firmly part of the community; as the record cover shows, tastin’ that spicey ribs just like fellows on the ball. His exciting live performances were ‘gefundenes fressen’ for folks to let their hair down after a tough working day and as such dealt with the connection between music and everyday life, between artist and community. His records often touched a nerve. And consequently sold really well.

Hot Barbecue swings all the way through. After the kickstart of the uplifting, riotious title track, that’s quite a feat. The group gets into the groove with a rollicking drum pattern that tastefully combinates snare and toms and an organ and guitar rhythm accent on the second and fourth bar. Sandwiched between the recurring, contagious theme that is topped off with happy, unpolished and joyful shouts of the group – “Hot Barbecue Today!” – are short and swift solo’s by McDuff, Benson and Holloway.

Not easy to top. Yet the set of concise soul jazz outings that follow maintain the same excitement; burners resplendent with affective themes, stop choruses and ‘screaming’ organ fills by McDuff such as 601 ½ North Popular, The Three Day Thang and Briar Patch alternate with the medium-tempo, frisky ditty Hippy Dip. McDuff also transforms two standards into soul jazz staples utilising a cleaner, sharp organ sound – The Party’s Over and Cry Me A River. The latter is the ‘churchiest’ of the set. Through McDuff’s carefully crafted storytelling the tension grows and the high spirits of a congregation are invoked.

For bringing this kind of sizzling stuff, McDuff happily relied on a group of soulful sidemen. The tag of ‘new man in town’ that George Benson, heir to the precursor in McDuff’s band Benson’d been so in awe of, Grant Green, wore, was worn off by now. On Benson’s fifth release with McDuff, the guitarist shows that his development from the cocky rock&roll-player in 1963 to one that delivers quicksilver jazz phrasing, using glissandos, pull-offs and such guitar trickery for added pleasure, was fulfilled. To be sure, in Benson’s style there’s brittle r&b abound. A highlight of his juicy amalgam of r&b and jazz on Hot Barbecue is The Three-Day Thang.

Both tenorist Red Holloway and drummer Joe Dukes, reliable constituents of McDuff’s entourage in the mid-sixties, cook up a spicey dish. Dukes tackles 601 ½ North Popular and Briar Patch as if he’s supporting Bill Haley and he might as well be! Besides incorporating the flair of rock&roll it should be obvious Dukes is also a very tasteful and smart drummer. His charming and sharp-as-a-razor way of embellishing the theme of Hippy Dip is but one example of Joe Dukes’ unforgettable, soulful style.

Hot Barbecue is a showcase for the hottest group of McDuff’s career. It involves an exciting, ‘screaming’ organ. It also involves sophistication and a fun atmosphere. As such, it doesn’t leave much to be desired.