I can’t get enough of Grant Green’s opening tune I Wish You Love from the guitarist’s mid-career album Street Of Dreams. It’s the epitome of Green’s ethereal qualities and works on an emotionally soothing level only true masters can bring about. 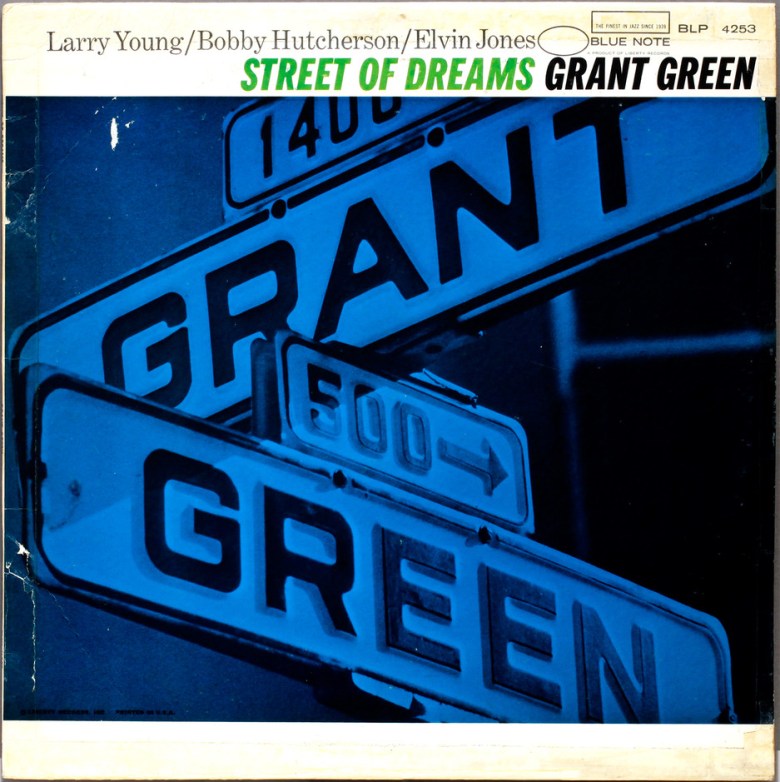 Side A:
I Wish You Love
Lazy Afternoon
Side B:
Street Of Dreams
Somewhere In The Night


Mid-career? Indeed, I define the album as such. Although Green recorded until his death in 1979, it’s fair to say that the seventies were disappointing for Green and that the relevant part of his career runs from his start in 1960 to the beginning of the following decade. Moreover, Green practically lived in the studio in the early sixties, mostly as solo and staff guitarist for Blue Note. Nobody did so much sessions for the famous label as Green, and certainly not between 1960 and 1965. Hence said stipulation that Street Of Dreams is a mid-career effort.

During that period, Green had struck up a fruitful recording relationship with organist Larry Young and drummer Elvin Jones. Elvin Jones is on a string of Grant Green albums, among them Matador. Naturally, Jones took part in recording Larry Young’s masterpiece Unity. The trio furthermore cooperate on a couple of ace Blue Note albums: Grant Green’s Talkin’ About and I Want To Hold Your Hand and Larry Young’s Into Something.

Street Of Dreams certainly is an ace album as well and evidence of how well the famed members of this group – augmented to a quartet by vibrafonist Bobby Hutcherson, who played on essential Green album Idle Moments – respond to eachother. Street Of Dreams and Somewhere In The Night are easygoing swingers including fluid solo’s by Green and Young, but the standout tracks are to be found on side A. Lazy Afternoon is a slow, mellow standard which charm lies in the combination between its harmonic subtleties and Green’s blues-infused playing style.

Both Lazy Afternoon and I Wish You Love benefit from the polyrhythmic finesse and tension-building of one-man band Elvin Jones, Larry Young’s economical, full-bodied backing and adventurous phrases and Hutcherson’s moody embellishments. In front of this crackerjack trio, Grant Green reaches bittersweet heights in I Wish You Love, which originally was a chanson from French singer Charles Trenet. There is so much to enjoy: a deceptively simple, patiently executed, beautiful melody and a memorable solo that constitutes nearly five minutes of sheer beauty. Then there’s that delicious sustain of Green’s Gibson guitar that must surely do an ‘embraceable you’ to you too. Green’s stately delivery of I Wish You Love never fails to bring me into a sweet and sour, ephemereal state of mind.

Street Of Dreams is a carefully constructed affair. From the front cover – an apt picture and illustration by Reid Miles of the intersection Grant Avenue & Green Street in San Francisco – via repertoire and titles to Green’s performance, it’s obvious that the album’s target is a soft spot in the heart. It certainly hits home. As one of many top class albums in Green’s book, I think Street Of Dreams will satisfy jazz fans that are charmed by the guitarist’s better known Idle Moments.