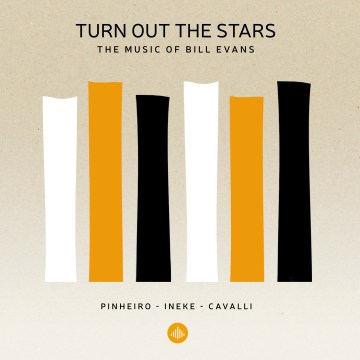 
Versatile Portuguese guitarist Ricardo Pinheiro, also a Psychology Graduate, is a keen interpreter of the jazz songbook and sustains a fascinating career that includes both fusion and the serene soundscapes of Caruma. His veteran Dutch colleague Eric Ineke has been there and done that and regardless of the age of 73 succeeds at continuously deepening his drum style. The trio is completed by Massimo Cavalli, harmonically refined bass player from Italy with a forceful, resonant sound. These gentlemen met in Lisbon and have already cooperated with Dave Liebman on Is Seeing Believing? (note the continuity of sleeve design) in 2016 and released their debut album Triplicity in 2019.

Swell and challenging idea, Bill Evans project. Unanimous decision by Pinheiro Ineke Cavalli, which alertly, tastefully and full of surprising details adheres to the piano giant’s far-reaching democratic principle of doing justice to every personality in the band. Very “Evans” as well: refined lightness that almost evokes weightlessness, which is a feeling that the internationally diverse trio brings to the fore very well while retaining its own authoritative identity.

A spacious and ephemeral sound and an angular but lyrical style, tagged by sleazily bended notes, are Pinheiro’s strong points. He’s convincing without superfluous exclamation marks. With bountiful calmness of line. And truly inventive at deepening Leonard Bernstein’s Some Other Time and medley Turn Out The Stars/Time Remembered with melodically astute use of echo, tone and volume control. The latter features Pinheiro working off the increasingly intense free forms of Ineke and Cavalli. Electric sheep jump fences. Silver apples seek the rising sun. Munchkins talk to the wind. Time went back to the future. Seldom if ever have we heard Bill Evans interpreted this way.

The conversational figures of the boppish Peri’s Scope, mix of cubist chords and rustling drum patterns of Michel Legrand’s You Must Believe In Spring, marvelous alternation of pizzicato and arco bass during Very Early and Ineke’s melodious solo lessons of simplicity during Interplay – indeed a very interactive performance – are snappy details in support of a layered whole. Simultaneously homage and stepping-stone for a new chapter in its suspenseful book, Turn Out The Stars finds Pinheiro Ineke Cavalli at the top of its game.

Find Turn Out The Stars here.