The Portuguese guitarist Ricardo Pinheiro gets inspiration from many sources, even Ennio Morricone. But it’s the way Pinheiro and his mates Massimo Cavalli and Eric Ineke treat standards that makes Triplicity remarkable. 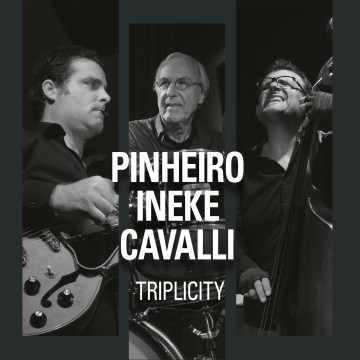 
In a trio without piano, doing without the harmonic safety rings of the pianist, the jazz musician will have to dig deep into the well of his creativity. Sonny Rollins did a number of iconic recordings, notably Live At The Village Vanguard. Motion by Lee Konitz is a key album. There’s the output of Elvin Jones with Joe Farrell and Jimmy Garrison. The common denominator of these records is, of course, drummer Elvin Jones, one of Eric Ineke’s greatest inspirations. Switching to guitar players, Barney Kessel, Jimmy Raney, Jim Hall, Kenny Burrell, Ed Bickert and Bill Frisell released a number of challenging albums in their lifetime. Avant-gardists like Arthur Blythe had their say in the trio concept sans piano as well. Nowadays, even if not everybody is yelling ‘Stein go away!’, the practice is fairly common. But an affair that is interesting from start to finish, is, more or less, fairly unusual.

Perhaps their European roots are responsible for the fact that guitarist Pinheiro, drummer Ineke and bassist Cavalli find few obstacles during their search of still newer land, just like fellow travellers Toots Thielemans, Elek Bacsik or Enrico Rava. A coherent narrative runs through the whole 46 minutes of Triplicity, courtesy of a Portuguese, Dutchman and Italian who, in that order, are sincere and intriguing, sublime and responsive, strong and lyrical. They have been associated for a number of years now and have also recorded Is Seeing Believing? with Dave Liebman. The sound of Pinheiro has a metallic edge, is perhaps like John Scofield’s not the sweetest and warmest, but stands out. His playing is both angular and expressive, synonymous with Portuguese coffee, that gives one a solid kick before revealing its many exciting flavors. Cavalli is solid but he also likes to dance, placing frivolous and inspiring figures behind the stories of his company.

Ineke is grounded in the American tradition. He draws from his experience of playing with myriad American legends and a lifelong passion for heroes like Elvin Jones, Philly Joe Jones, Kenny Clarke, but is very hip and prolific, getting a kick out of cooperating with colleagues of all nationalities and ages and still eager to step out of his comfort zone. Perhaps his North-European background is most evident in the way he neatly puts all the ideas that flow around into context, meticulous like the tower controller at Schiphol Airport. Contrary to airport officials, however, Ineke allows himself a lot of freedom to color in the lines, is subtle or heated dependent on the situation, and always melodic.

Pinheiro carries the embellishments and understated passion from his Brazilian/Portuguese forebears, and also a bit of Django Reinhardt’s pace and clarity, over to his style, especially during Pinheiro’s Blues Just Because and Antonio Carlos Jobim’s Retrato Em Branco E Preto. Partly because of this, the tunes are more closely linked than one would generally assume. Retrato develops from a dark-hued bowed bass section into an angular folk romp with a cinematic character. It’s easy to imagine a little movie scene in the countryside, a tipsy old couple slowdancing in the moonlight, gyspy children playing with a cat’s tail, a woman with a tear in her eye that runs down through the gullies of her cheek… Blues Just Because is a Now The Time-ish melody, boprocked considerably by the group and soloist Pinheiro, whose integration of crunchy chords adds to his multiplex of animated lines. Pinheiro even found time to pay attention to the last chord. It’s a lurid one similar to the way Eric Clapton would, and did, end a Cream song! Endings seem to comprise something of a running gag by Pinheiro, who also finishes Along Came Betty and George Shearing’s Conception with quaint, if rather more soft-hued, chords.

Blues Just Because‘s construction allows a lot of freedom for the voice of each personality, a method that marks the complete set. Morricone’s Cinema Paradiso gets a spheric reading, the Sketches Of Spain-type tale from Pinheiro is underlined by effective counter-rhythm by Cavalli and Ineke. Cavalli makes the most of one of his many opportunities to solo on this album, speaking with gusto and emotion. Cinema Paradiso is song turned into meaningful improvisation.

Benny Golson’s Along Came Betty, the hard bop anthem best known in the classic version by Art Blakey & The Jazz Messengers, is salsa-fied with, again, tasty bass and drum intermezzos and suspenseful counter-rhythm, which makes it simultaneously loose and swinging. The three voices of If I Should Lose You speak as a unit but also separately, a way of working that depends on the power of conversation, which Pinheiro, Ineke and Cavalli have in abundance. Pinheiro’s groove is contagious. His ability to stretch bars or leave turnarounds be seems in-built. Ineke’s subtle brush work is the foundation of the tune, surely an album highlight. Ineke is a master with brushes on this one, and also during You’ve Changed. Carl Fisher’s ballad is also marked by great Cavalli stuff, whose phrases during Pinheiro’s solo glance forward to his own following statements. Lithe, crystalline strumming from Pinheiro ends the ballad on a beautiful, bittersweet note.

Standards turned into meaningful alternatives, with a lot of motion. On the other hand, When You Wish Upon A Star, the Disney tune that has been performed by countless artists, Glenn Miller, Guy Lombardo, Louis Armstrong, Dave Brubeck, Joe Pass, Keith Jarrett and Wynton Marsalis among them, will never be the same again. It is not an alternative but a relentless deconstruction. A drone with shadows of melody evoking the Indian raga, it is marked by evocative Ineke/Cavalli interaction and hypnotic Pinheiro playing, which suggests a definite upbringing with late sixties psychedelica. To perfectly trim the trio’s outlandish Disney-interpretation, Pinheiro makes use of dubbed guitar and a slice of feedback. Not unlikely, upon hearing it, the guys of Radiohead would be transformed from paranoid androids to frenzied fans of Pinheiro, Ineke & Cavalli’s extravagant closer.

The rabbit in the hat of an already surprisingly original album.