Buried in the excess of groove-oriented records in the late ‘60s and early ’70s: Wilbert Longmire’s Revolution, funk jazz gem of a promising and talented guitarist. 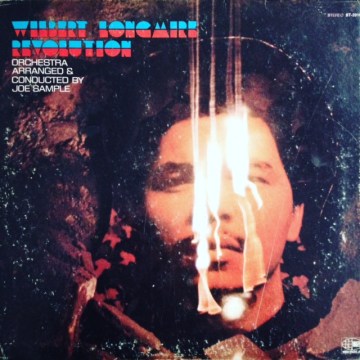 Side A:
Scarborough Fair/Canticle
Galveston
This Guy’s In Love With You
Theme From “The Fox”
Revolution
Side B:
Movin’ On
Bewitched
Somebody Loves You
Give It Up Or Turnit A Loose


It might’ve been because World Pacific hardly backed up what little funk jazz the Californian label had in its roster, at least not the way Prestige or Blue Note put their stuff on the market place. It might’ve been because Longmire didn’t promote Revolution with a proper working band. Anyway, Longmire’s debut album has always been decidedly under the radar, a fact of funk jazz life that is too bad and in dire need of rectification. If hardly revolutionary, Revolution is a first-class soul jazz effort and should be high on reissuing lists. Anyone? Fresh Sound?

Born in Mobile, Alabama, raised in Cincinnatti, Ohio, Longmire played with Red Prysock and organists Brother Jack McDuff, Trudy Pitts and Hank Marr. Check out Longmire on Marr’s Live At The Club 502 here. Somehow World Pacific got a hold on him and the guitarist was West Coast bound, ending up in the company of two crackerjack Jazz Crusaders/Crusaders, Joe Sample and Wilton Felder. Extremely active as guest artists and producers outside the realm of their prolific hard bop and soul jazz collective, Joe Sample arranges and conducts the band and string section and Wilton Felder plays tenor sax on Revolution, which also features excellent drummer Paul Humphrey.

Chockfull of contemporary tunes and hits, Longmire selected Simon & Garfunkel’s Scarborough Fair, Jim Webb’s Galveston, David/Bacharach’s This Guy’s In Love With You, Lalo Schifrin’s Theme From “The Fox”, John Lennon/Beatles’ Revolution, The Delfonics’ Somebody Loves You and Carl Bobbitt’s Give It Up Or Turnit Loose, which was immortalized by James Brown. Revolution is completed by Lorenz Hart/Richard Rodgers’ Bewitched and his original composition, the sweeping blues Movin’ On.

Such an abundance of pop and soul might easily overwhelm and ultimately bore the jazz listener. However, Longmire succinctly wards off this threat with his flexible, original style. Fat, crystalline tone, fast fingers, gusty winds of varied triplets, thunderstorms of triplets, tsunamis of triplets… Subtle twists and turns, plenty of fire, bossy attitude. Longmire treads the ground between Grant Green and, similar relative unknown as our subject of funkiness, Freddie Robinson; between blues and jazz. Longmire is in the forefront of the mix, bursting from the speakers, embedded in the big sound of a band that includes the typically turbulent and soulful tenor of Felder, a number of wicked and greasy stories by organist Leon Spencer Jr. and a section of strings that, rather surprisingly, does nothing to diminish the record’s solid pocket.

Nothing wrong with the slick soul of Somebody Loves You, the added fuel to the fire of the smooth country-pop of Galveston and the tasty shuffle treatment of Revolution. Give It Up Or Turnit A Loose kills the dance floor crowd but Longmire’s rendition of Scarborough Fair is without a doubt the heaviest mother of his funk repertoire. No Spotify, no reissue to date, link on YouTube luckily, so here’s Scarborough Fair. Fair enough? Absolutely not, but make do and enjoy.