Coming home to a group of hi-level colleagues as featured on Elmo Hope’s first Riverside album Homecoming must’ve been a thrill. It certainly is an exciting session of the unique, tragically underrated pianist. 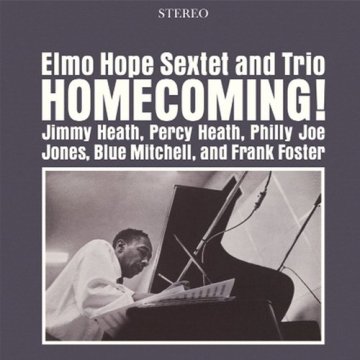 Side A:
Moe Jr.
La Berthe
Eyes So Beautiful As Yours
Homecoming
Side B:
One Mo’ Blues
A Kiss For My Love
Imagination


You are Elmo Hope. Born in New York City in 1927. Childhood pal of Bud Powell, spinning records of Johann Sebastian Bach all day long with the future giant of bebop, when soon after Thelonious Monk joins to complete the illustrious, mutually responsive threesome. As a young man, you catch a bullit from a white police officer, (sounds familiar?) in a hideous, disgraceful turn of events being trialed but ultimately released. You marry, have a son, who dies tragically young. Highly talented, working towards identical musical conclusions as Powell, Monk, Parker, yet in your own peculiar way, you miss out on the burgeoning bebop scene when Uncle Sam calls: ooh ooh ooh, you’re in the army now, from 1943 to ‘46. The following Korean War is settled half-heartedly in 1953 when you’re featured on Lou Donaldson/Clifford Brown’s New Faces New Sounds 10inch LP on Blue Note, which benefits from your excellent writing. (you’ll prove to leave a legacy of brillant compositions) You become a leader in your own right, recording the unforgettable albums Informal Jazz (Prestige 1956, with John Coltrane, Hank Mobley and Donald Byrd) and Trio And Quintet (Blue Note 1957, recordings from ’54 to ‘57) but public recognition keeps eluding you.

Then there’s the needle. Has been there all the while. Having lost your cabaret card in New York City, without which a musician is practically unemployed, you move to the West Coast. Its scene doesn’t exactly seems to meet your standards but you nonetheless record the first-class Elmo Hope Trio (HiFi 1959) and partake in a classic session with fellow expat Harold Land and trumpet enigma Dupree Bolton, the unbeatable, stunning The Fox, filled with world-class Hope tunes. It’s back to NYC in 1961, the Homecoming album is not to be sneezed at. Following albums on Riverside bear puzzling titles as High Hope (you mean, like a lot of hope or Hope’s always high or what?) and Hope-Full, a duo album with Hope’s wife Berthe. Perhaps Riverside Riverside hoped (no pun intented) that it would outsell Ella & Louis? There’s Sounds From Rikers Island on Audio Fidelity, an intriguing album including John Gilmore and Philly Joe Jones, ironically, recorded at the jail Hope did time in. You are performing regularly in NYC with, among others, John Ore and Billy Higgins. But it doesn’t seem to happen. Monk (Man, did he have to struggle against the odds) will make the cover of Time Magazine in 1964. You’ve been interviewed by Downbeat Magazine just once during the course of your career. This, somehow, inexplicably, sometimes happens…

The story of Elmo Hope, extraordinary, unique pianist, ended tellingly in 1967, age 43, in a hospital that specialised in addicts. Supposedly very unprofessionally, according to Berthe, as something went wrong and Hope died of pneumonia. Slowly but surely, the wheels of appreciation have been turning in Hope’s favor, slightly lacking behind the other ‘unknown’ piano giant, Herbie Nichols. Much too late, but slowly and surely. It is said Hope’s unpredictable style, focusing on the architecture of the composition instead of virtuosity, prevented broad public recognition. Might be. (the above-mentioned concise life story offers some possible clues) However, Monk was a puzzling personality, yet finally made the grade.

All things considered: a brilliant pianist. In Hope’s playing, an underlying sense of foreboding is almost always there. He’s a nervous type of guy but also light-footed, a bittersweet personality. His touch ruthless or tender, his timing floating like a bottle on the ocean waves, Hope’s unusually structured compositions move with a surprisingly natural flow. Homecoming finds Hope re-united with like-minded firebrands, drummer Philly Joe Jones being the ultimate burner. At the core of the session is the conversation between Philly Joe and the fellows – Jimmy Heath, Frank Foster, Blue Mitchell, Percy Heath – and Hope in particular, with four tunes consisting of the trio format. The pushing of Jones of Moe Jr.’s hi-speed changes is a treat, the way he tickles the senses of Hope with a playful torrent of rimshots – a melodic answer to Hope’s preceding questions – is the cherry on the top. Hope is close to buddy Bud here, yet as a contrast lets notes hang suspended in the air, alternating the silence with tumbling tremelos.

The trio sends the title track to the stratosphere and Philly Joe Jones drives Hope to the rail. Come on, St. Elmo, be quick, be swift, hurry home, time may await but… Hope responds, so effortlessly stretching lines over the bars, a roaring run in the upper register here, a James P. Johnson-figure with the left hand there. Yes, Philly Joe, I’m almost there… But not quite and (consciously, like Mingus, embracing shift of tempo into the bag of new means of expression?) Hope, Jones and Heath fasten the pace considerably and subsequently end with a luscious sigh. Hope takes care of the coda on his own. Peace, quietude, the road always leads…

Elmo Hope plays lines you were unlikely to come across in 1961. They pry La Berthe’s fascinating melody, which would become messy in the hands of lesser talents, running smoothly somehow via Hope’s singular route from mind to fingers. The tune asks a lot from the horn men and keeps Foster, Heath and Mitchell on their toes. A restrained use of notes by Hope benefits the melancholic Eyes So Beautiful As Yours, definitely Hope’s Crepuscule With Nellie. A somber dedication to his wife, obviously the best thing happening in Hope’s troubled life besides jazz music.