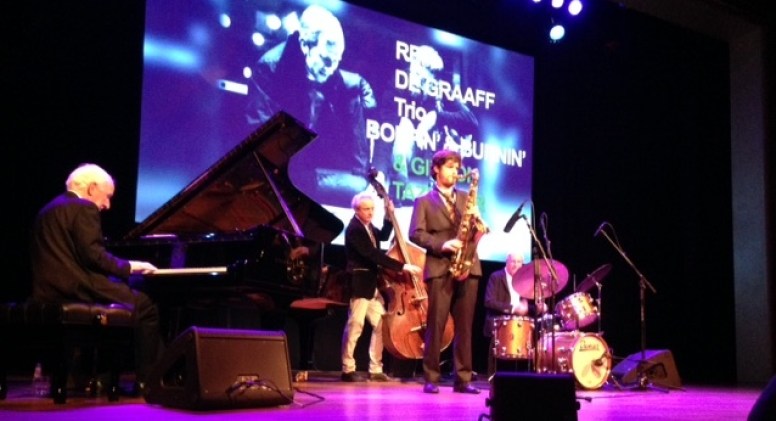 REIN DE GRAAFF TRIO & GIDEON TAZELAAR IN CONCERT – Throughout the 50s and 60s, Haarlem in The Netherlands boasted one of the liveliest jazz scenes in the Dutch jazz landscape, churning out distinctive mainstream jazz players as Cees Smal, Harry Verbeke, Ruud Brink, Fred Leeflang, Ray and Dick Kaart. Drummer Eric Ineke, albeit a prototypical The Hague-ian hardbop cat for decades now, was born and raised in the city that gave its name to the famous cradle of jazz on the north side of Manhattan, New York. Authentic jazz gradually left the grounds of Haarlem, but now the Philharmonie strives to breathe life into the patient, organizing a series of diverse performances at the prestigious hall nearby the Grote Markt in the center of Haarlem. The monicker: Jazz At The Phil. The producer: saxophonist Yuri Honing.

The Rein de Graaff Trio plus a young lion on tenor saxophone, the 21-year old Gideon Tazelaar, kickstart the season into gear. During the season, Yuri Honing will provide short interviews on stage, but the highly acclaimed saxophonist is touring abroad so instead recorded the interview with De Graaff shortly before the event to be shown on the video screen that lights up the venue with a giant portrait of Rein de Graaff and the evening’s theme of ‘Boppin’ And Burnin’. Classy view! Unfortunately, bad sound quality prevents the audience from hearing the bulk of the interview.

No worries, pianist De Graaff, who turns 75 this month, is a seasoned master of ceremonies who introduces each tune in his own sweet, informative and level-headed way: the respectful way a jazz musician should treat its audience. De Graaff, elder European statesman of mainstream jazz who played with myriad legends like Dizzy Gillespie, Teddy Edwards, Hank Mobley, Johnny Griffin and Dexter Gordon, and his two companions, including the equally distinguished Eric Ineke, are crackerjack providers of their customary recipe of ‘bebop, ballads and blues’.

This is the way it goes: beforehand De Graaff and the other gentlemen take a quarter of an hour to pick the tunes they feel inclined to play, easy does it, since the American Songbook has been in their bones for ages, and then some. A deceptively nonchalant method that makes a night of the Rein de Graaff Trio not so much a preservation of the jazz tradition, but more a passing on to the next generation, provided it’s receptive for the challenge. Innovative? Not really, but world-class and always blues-based and swinging. Besides, as De Graaff mentions during one of the audible fragments of the interview, how are you going to develop avant-leaning playing without a secure knowledge of the roots?

It’s the details that reveal the band’s cachet. So then you notice the melodic Q&A’s of Eric Ineke with De Graaff’s long-lined, Hampton Hawes-type story of My Melancholy Baby. And Ineke’s appreciative nods in response to Tazelaar’s high register, edgy wail and quote of Coltrane’s Blue Train during Dexter Gordon’s blues tune Stanley The Steamer. You realize that tenor, bass drum and toms are like brothers and sisters, share a frequency that tonight renders the usual second horn in the classic hard bop format obsolete.

There’s bassist Marius Beets to pay attention to. The successor to Henk Haverhoek and the recently deceased Koos Serierse for almost two decades now, a groover who strives, and most of the time succeeds, to find the right notes to play, the asset that one of his heroes, Ray Brown, is so famous for. And there’s the combined, hard-swinging effort from note one during the opening tune Topsy that must be a warm bath for the young Tazelaar. De Graaff’s poised statements, spiced by risky twists and turns high up the keys, cannot leave Tazelaar unperturbed. Oh, you hear him think, it’s gonna be such a night!

Tazelaar, the outstanding, rapidly developing talent who is currently studying at Juillard in New York City, charms the audience with a full-bodied, smoky sound and an alluring, slightly-behind-the-beat timing, particularly during the quartet’s mellow but driving medium-tempo groove of I Thought About You. He’s been turning into a mature structural improviser and sets fire to Cotton Tail, eating up the I Got Rhythm-changes, unfazed, perhaps stimulated, by the fact that, in 1940, Ben Webster graced the Duke Ellington tune with a stellar, genre-defining solo. Tazelaar’s relaxed posture and sly grin are infectious.

Topsy, Cotton Tail, Embraceable You. And My Melancholy Baby, which, De Graaff remarks, was already played during the ill-fated trip of the Titanic. The Rein de Graaff Trio and Gideon Tazelaar really went way back this evening. The repertory was boppified and burned expertly.