Sugar, Stanley Turrentine’s first release on CTI, catapulted the tenorist into jazz stardom. It sold extremely well, in spite of its lenghty trio of tunes. A big part of the album’s mass appeal must be attributed to producer Creed Taylor. Taylor, also responsible for the big break of Jimmy Smith on Verve in the mid-sixties and George Benson on CTI in the early seventies, embedded Turrentine’s down-home hard bop style in streamlined jazz funk terrain. The result is a mixed bag. 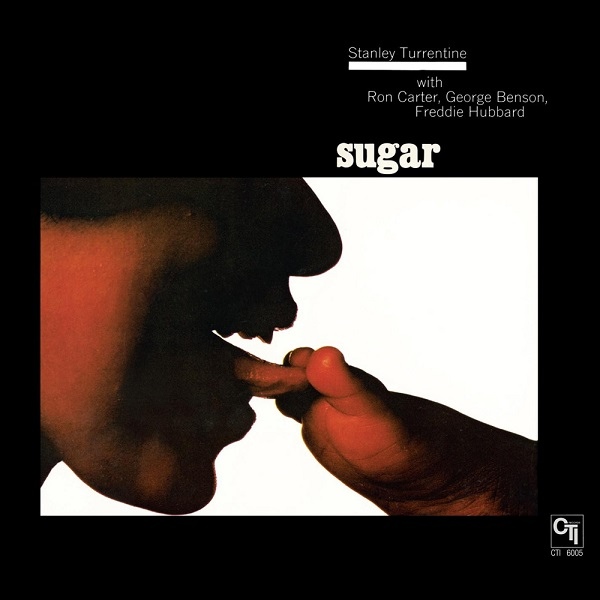 Side A:
Sugar
Sunshine Alley
Side B:
Impressions


Almost inevitably Taylor’s marketing strategies have as a consequence that something is lost. In this case, Turrentine’s smoky, blues-drenched sound and style; vintage Turrentine that is to be found on his many releases from the sixties, solo and with his wife, organist Shirley Scott on Blue Note and Prestige, and as a sideman with, among others, Jimmy Smith, Kenny Burrell and Max Roach.

On the whole, the all-star cast as well as newcomers Butch Cornell and Lonnie Liston Smith turn in top-notch performances and the mood is joyful and relaxed. The title track is a mellow groove. And even if Turrentine’s sound, in comparison to his ‘breathy’ sound of the sixties, is the musical equivalent of a silken scarf, his flowing, imaginative statements are proof of what a class act Turrentine is.

Latin tune Sunshine Alley, written by organist Butch Cornell, has an equally relaxed vibe. George Benson adds fiery, r&b-tinged licks to the flashy and pyrotechnical pallette of phrases that the guitarist demonstrated up until then. It’s a welcome change of mood. Hubbard’s solo starts with a climactic bunch of phrases, which obstructs a reasonable build-up. Turrentine seems contaminated and sounds a bit over-excited too.

The take on John Coltrane’s Impressions includes inventive solo’s by Hubbard and Benson and Turrentine’s lines are carefully crafted. Nonetheless, there is a decisive lack of swing that makes it hard to sit out. A couple of concise tunes on side B instead of the cumbersome version of Impressions would certainly have added to the attraction of Sugar, artistically and arguably also on a commercial level. Wouldn’t it have sold even better with a spicy side B?

Sugar is slick but excellent, not heartless but not really endearing either. It’s a commercial succes but in an artistic sense it’s nowhere near the best Blue Note albums by Stanley Turrentine.