Can hardly go wrong when Nat Adderley, Wynton Kelly, Paul Chambers and Oliver Jackson are aboard. And indeed, r&b-legend King Curtis’s rare foray into jazz The New Scene is an excellent, sleazy and blues-drenched album. 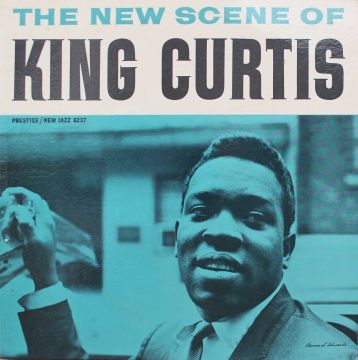 Side A:
Da-Duh-Dah
Have You Heard
Willow Weep For Me
Side B:
Little Brother Soul
In A Funky Groove


Curtis Ousley. As far as the late famous Dutch writer Harry Mülisch would’ve been concerned, Ousley should’ve kept his real name. The notorious creator of order in existential chaos opinioned that the perfect names of writers and artists consisted of two syllables each for surname and last name. It has that ring to it. Naturally, Harry, full of himself to the point of insanity, was delighted by the sound of his own name.

His statement was a load of crap. But names of some of jazz’s epic artists would have had made Mülisch affirm the worth of his statement: Louis Armstrong. Charlie Parker. Ornette Coleman.

All well and good but Ousley eventually took on the name of King Curtis, why not, “King” always sounds pretty cool, has a nice ring to it, think King Oliver, King Pleasure, King Kong… and the man from Fort Worth, Texas built a career as one of the prime rhythm and blues and rock and roll-saxophonists of the 1950’s and 1960’s. The Lionel Hampton alumnus became a studio session crack alongside Richard Tee, Cornell Dupree, Jerry Jermott, Bernard Purdie and Ronnie Cuber. He played on Aretha Franklin’s Respect and, later on, on Franklin’s Live At Fillmore West album, as well as the Yakety Yak and Charlie Brown hits by The Coasters. As a leader, Curtis scored hits with Soul Twist, Soul Serenade, Memphis Soul Stew and Ode To Billy Joe, whose soul went up, up and away from the Tallahatchie Bridge.

Anybody who has heard 1966’s Live At Small’s Paradise remembers that the booming band and big-bottomed tenor sounds of King Curtis put a hole in the wall of their hole in the wall. It wasn’t to last, as dramatically Curtis passed away in 1971, the victim of stab wounds on the steps of his apartment in New York City. Intending to carry his air-conditioning upward, a drug dealer refused to get out of the way and Curtis was fatally wounded in the ensuing fight. Horrible fate. The funeral was attended, among others, by Aretha Franklin, Stevie Wonder, Cissy Houston (Whitney’s mother, Diana Warwick’s aunt) and Duane Allman, who would tragically die caused by a motorcycle accident two months after Curtis’s passing.

Like a lot of players in the classic era of “black” music, Curtis switched naturally from style to style and was well-versed in swing and mainstream jazz, influenced by Lester Young, Illinois Jacquet and Gene Ammons. But if it wasn’t for Prestige/New Jazz, there would have been no recorded evidence of his jazz chops. In 1960, the label cut two sessions with Nat Adderley (credited as “Little Brother” for legal reasons), Wynton Kelly, Paul Chambers/Sam Jones and Oliver Jackson/Belton Evans. That same year, Curtis was also part of a three-tenor date alongside Oliver Nelson and Jimmy Forrest, Soul Battle.

While most hard bop colleagues added a couple of blues-flavored tunes to their modern jazz repertoire, Curtis worked contrasting strategies. His blues-drenched sets are completed by a boppish tune and standard. The New Scene features the spicy line of Da-Duh-Dah, Soul Meetin’ includes What Is This Thing Called Love.

Oliver Jackson’s hi-hat is like chili pepper seasoning hot tamales and his timing is razor-sharp, only thing Curtis and Adderley can do is be inspired and blow some sassy solos on Da-Duh-Dah. Curtis feels at home among his new ‘scenesters’ and dedicates the rest of his LP to basic blues lines, finding Little Brother Nat buoyant and sleazy, reveling in shenanigans in the upper register.

The King acquits himself very nicely, his tone a dirty mix between honk and sigh, his vibrato flurries the icing on grandma’s home-made cake. On his own, Curtis finds copper in the mine of Willow Weep For Me, which supposedly was devoid of riches but given a new lease in life by Curtis’s discovery of a cushion-soft blues voice on tenor saxophone, his prime instrument although the Texan Tenor was also proficient on alto and soprano.

All in all, excluding the tepid bowed solos of Paul Chambers, otherwise brilliant at this particular art of bass playing but uninspired here, The New Scene is recommended Saturday Night Fish Fry listening, no pretensions, just plain good groove that travels from the ears to the heart and above all the loins. 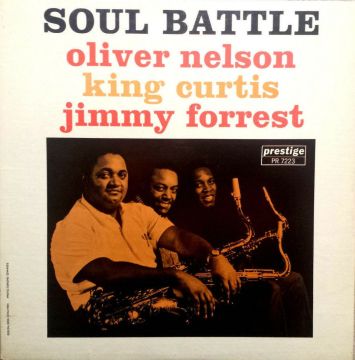