Everybody passionate about the fusion of jazz and world rhythm owes big time to Yusef Lateef. 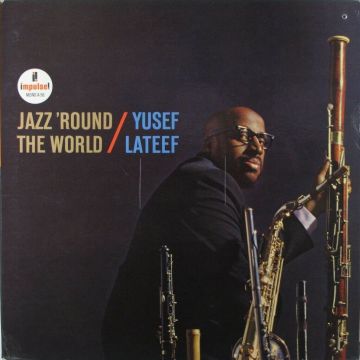 Side A:
Abana
India
You, So Tender And Wistful
Yusef’s French Brother
The Volga Rhythm Song
Side B:
Trouble In Mind
The Good Old Roast Beef Of England
Raisins And Almonds
Utopia
Ringo Oiwake


In the late 50s and early 60s Lateef, a Detroit cat that counted among his collaborators fellow natives Elvin Jones, Kenny Burrell and Paul Chambers and came into prominence with the band of Dizzy Gillespie, boasted his post-bop records on Savoy and Prestige with tunes like Rasheed and Meditation. Interested in foreign cultures from an early age, Lateef developed into a multi-instrumentalist, adding koto, shenai, shofar and argull to his Western instrumentarium of tenor saxophone, flute, oboe and bassoon. As a prime pioneer of jazz world music, Lateef is perhaps equaled only by pianist Randy Weston. As journalist Peter Keepnews said, Lateef “played world music before world music had a name.”

Lateef, born William Huddleston in 1920, a couple of months after the birth of Charlie Parker, also was early in adopting a Muslim name and converting to the Islamic faith of Ahmadiyya, front-running the development of black artists that turned for guidance to Eastern religion which among numerous others included Ahmed Abdul-Malik and Sahib Shihab. In the view of Cannonball Adderley, who never changed his name but eventually did delve into spiritual matters, turning to astrology, wearing colorful Eastern garb and releasing The Black Messiah in the early 70s, Brother Lateef was an exotic player whose style nonetheless, Cannonball never failed to stress, was firmly based in the blues. Lateef was part of Cannonball’s group in 1962/63. In 1963, Lateef signed with Impulse, a label that, considering its affiliation with the cosmic captain of spiritual matters John Coltrane, suited him to a T.

Lateef brought to his debut album on Impulse, Jazz Round The World, the traditional blues Trouble In Mind, which the Cannonball Adderley Sextet performed as well. It fits right in. Strikingly, whether Lateef explores Africa, India, the Mediteranean African region, England or the Balkan, the result is coherent and organic, not forced at all.

The fun’s in concise tunes with concise statements and in the details. The calypso rhythm of Yusef’s French Brother is structured with pleasantly “out” piano phrases, a tenor/trumpet interlude, a six-note descending flurry of tenor notes as a means of introducing the trumpet and a few booming circular riffs by Lateef as climactic ending, all within the time frame of one minute.

The hallucinatory drone of Abana has a Bolero-feel that benefits from a lovely ensemble of bassoon and trumpet, India is marked by a cunning tenor/trumpet chase. There are fragments of polyphony during the Volga Rhythm Song. The Good Old Roast Beef Of England is a witty and eventful handling of a obscure folk melody, bringing to mind the original folk interpretations of Sonny Rollins. Lateef takes the transmogrification of folk music one step further, moulding the transnational Frère Jacques into the jolly You So Tender, Wistful. Lateef’s swinging tenor wails and is marked by elliptical transitional phrases, staccato segments and circular riffs.

Lateef’s vital tenor playing is matched by the bright and resourceful trumpet of Richard Williams (reconnecting with Lateef after 1960’s The Centaur And The Phoenix on Riverside) and acute piano of longtime Lateef associate Hugh Lawson. Lawson would continue to appear on a number of Lateef’s Impulse records well into the late 60s. Both are surprisingly comfortable in the outlandish surroundings.

Detroit may have been a long way off but listen well and notice that, how far away Lateef may have traveled, Motor City remained vital to his identity.