As usual, The Eric Ineke JazzXpress goes full steam ahead, bringing home the music of Charlie Parker in refreshing manner on What Kinda Bird Is This? 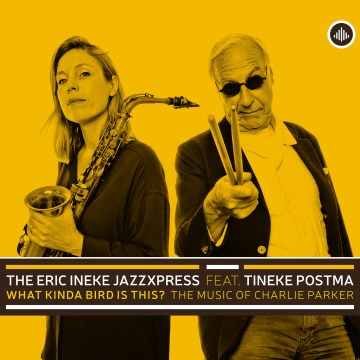 
IIf the sign of true genius is the spontaneous response to catastrophic circumstances, Charlie Parker’s Dial recording of Lover Man in 1947 is number one with a bullet. It gave rise to a confusing mix of shock and adulation from the start. In the middle of a bad trip and on the verge of a nervous breakdown, Parker shaped an emotionally charged story with instinctive revisions of his faltering phrases. Parker was horrified by the release of the record. Shortly afterwards, Parker was admitted to Camarillo Mental State Hospital in California. His release from the asylum inspired a new original composition, Relaxin’ At Camarillo.

Both Lover Man and Relaxin’ At Camarillo are interpreted (quite impressively) on What Kinda Bird Is This? by The Eric Ineke JazzXpress, one of the most swinging contemporary tributes to Charlie “Yardbird” Parker, inventor of bebop, genius of modern music, whose 100th Birthday was celebrated worldwide on August 29. Ineke, veteran Dutch drummer who played with Dexter Gordon, Dizzy Gillespie, Johnny Griffin and Jimmy Raney, amongst many others, and is an acclaimed teacher at European conservatories and inexaustible (hard) bop ambassador on and off-stage, has released eight records as leader of The JazzXpress since 2006. On What Kinda Bird Is This?, Ineke is joined by his regular bassist Marius Beets, pianists Peter Beets, Rein de Graaff and Rob Agerbeek – all of whom substituted for the (temporarily) ailing Rob van Bavel – trumpeter Ian Cleaver, tenor saxophonist Sjoerd van Dijkhuizen and alto saxophonist Tineke Postma.

The band’s refurbishment of Parker in its own image is underlined by nifty arrangements by Marius Beets, Dijkhuizen and Van Bavel. Relaxin’ At Camarillo (Van Bavel) sounds like the sort of tune that would not have been out of place on Blakey’s Ugetsu or one of John Coltrane’s Atlantic records. It uncoils mischieviously, like a snake, through firm choruses of modality and various shadings of the melody, climaxing with Parker’s indelible long line. An intriguing version that furthermore swings like mad.

At the other end of the spectrum, Lover Man is a playground for Tineke Postma in the trio format. Her long, constantly lively story is a balancing act of tuneful phrases and clusters of notes that burst out of the changes en route to the outskirts of the Milky Way. Wordly wisdom seems to have increasingly pervaded her style, to the point where sour grapes are transformed into a splendid bottle of Chateau du Charles Lloyd. The wine manages to call a definite feeling of melancholy. Postma, highly engaging throughout the record, devours the other trio cut, Au Privave, a concise progressive reworking of Parker’s blues line that reflects the rapport she has built up the last few years with Ineke, whose matchless timing and alert interplay stems from decades of experience. At age 73, the pater familias of The Hague’s mainstream jazz scene is at the top of his game.

Sjoerd Dijkhuizen, always willing to share his penchant for Dexter Gordon-type phrasing, nails Birdie Num Num, Marius Beets’s variation on Parker’s Confirmation. Beets’s What Kinda Bird Is This? features witty lines by young lion Ian Cleaver, who impresses with bright, fearless notes in the upper register, and a virtuoso exercise by “Brother” Peter Beets, whose ability to swing a band into the ground is one of the virtues that won him international acclaim. Parker’s Mood is perfect foil for Rein de Graaff, long-time companion of Ineke and comfortable in a slow blues vein.

Affinity with lesser-known Parker compositions – Stupendous, Bongo Beep, Merry Go Round; the dizzying effect of the latter’s variation on I Got Rhythm is in sync with the title – is yet another interesting aspect of What Kinda Bird Is This? This ‘Bird’ is a triumphant continuation of form by the Eric Ineke JazzXpress, which for this occasion is a configuration of individuals that assert themselves with authority in the setting of Parkeriana.