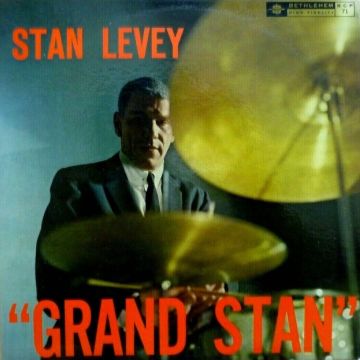 in November 1956 in Los Angeles, California

Side A:
Yesterdays
Angel Cake
Why Do I Love You
Grand Stan
Side B:
Hit That Thing
Blues At Sunrise
A Gal In Calico
Tiny’s Tune


Steam came out of Gerry Mulligan’s ears. It took a couple of years to evaporate. On account of his popular piano-less quartet with Chet Baker, the baritone saxophonist became synonymous with West Coast Jazz. But, assuming that West Coast Jazz was, opposed to the edgy and hot East Coast Jazz, polished, arranged and cool, it dealt Mulligan, regardless of his contributions to ‘cool’ music, very short. To say that West Coast was white and East Coast black isn’t entirely accurate. To say that it is laid-back and relaxed as a result of the sunny climate, as Shelly Manne suggested, is open for debate. Ever heard that argument in a discussion of West and East Coast rap music in the 90’s? Momentarily, who knows, until that fateful day everybody killed everybody in a battle royale.

Music that relied heavily on arrangement and composition instead of individual expression may have been predominant, largely created by musicians that came from the bands of Claude Thornhill, Woody Herman and Stan Kenton and mostly on Capitol, Contemporary and Pacific. But the Brooklyn-born, extraordinary drummer and club owner Shelly Manne is responsible for one of the greatest series of live hard bop recordings – Live At The Blackhawk Vol. 1-5 – in jazz. Les McCann released his gospel truths on Pacific Jazz. Shorty Rogers was in fact a smokin’ trumpeter, Bud Shank turned out to be a gritty saxophone player in his later years. L.A.’s Central Avenue was a hotbed of bebop in the late 40’s and of great influence on the next generation. The City of Angels was a place where Eastern expatriates Harold Land and Elmo Hope recorded some of their best work. Labeling, part human impulse, part sales ploy, has the tendency to confuse rather than clarify.

And Stan Levey? Stan Levey was hot! Born in Philadelphia in 1926, the drummer made his first important mark in the mid-40’s as a collaborator of Charlie Parker, Dizzy Gillespie and Oscar Pettiford, one of the earliest white colleagues of the fathers of bebop, expanding on the rhythmic example set by Kenny Clarke. Levey moved to the West Coast in 1954 after a stint with Stan Kenton, joining the Howard Rumsey All-Stars and building one of the most prolific West Coast careers in jazz and the Hollywood studios. In a career that spanned approximately thirty years – Levey retired in 1974 to become a professional photographer – Levey performed and recorded with an iconic who’s who of jazz, from Coleman Hawkins, Lester Young, Thelonious Monk, Miles Davis, Stan Getz, Art Pepper, Oscar Peterson to Frank Sinatra and Billie Holiday.

Levey recorded a couple of cookin’ solo albums as well, among those Grand Stan, released on Bethlehem in 1957. Bethlehem: odd but great-sounding name for a record label. Founded, by the way, in New York City by Swiss émigre Gus Wildi in 1953. Interesting label. Would’ve been appropriate if it had recorded Charlie “Yardbird” Parker, the Jesus Christ of Jazz, part rebel rouser, part Messiah, at least once before he stepped on a rainbow or, more appropriately, flew the coop. Bethlehem presented great sleeves and Grand Stan, designed by the widely admired Burt Goldblatt, is no exception. It furthermore offers a lovely in-joke title and a cast that features trumpeter Conte Candoli, tenor saxophonist Richie Kamuca, trombonist Frank Rosolino, pianist Sonny Clarke and bassist Leroy Vinegar – all of them, excluding Sonny Clarke, California-based at that time, all of them warm-blooded swingers.

Like so many records from the 50’s, Grand Stan should be considered excellent material for young students of the drums. Levey’s firecracker introductions are worked out in the melodic spirit of the compositions. The crisp drive of his hi-hat, combined with sparse, spot-on accents, is alternated with tension-heightening ride cymbal, developed into a package that is both supportive and possessed with a steam all its own. Punch, spirited teamwork and a keen melodic ear. So many post-war European drummers have benefited from the likes of Levey: Daniel Humair, Alex Riel, et al. Listening to Grand Stan, I’m practically hearing veteran Dutch drummer Eric Ineke play. Ineke’s individual and highly propulsive re-enactment of ‘American drumming’ has enchanted us for many years now. Great teacher, by the way.

Levey tackles a book of songs that by way of standards, riffs, bop and the blues is short on ambition to travel beyond common mainstream practice but pleasantly surprises with the ease and depth of its execution. It is of particular interest that four tunes feature strictly one soloist, which gives each a chance to thoroughly stretch out, and lively to boot. Few trombonists move through Yesterdays with the bounce, purposeful pace and clarity of line and sound than Frank Rosolino, whose tragic life – the troubled Rosolino killed himself after shooting both sons in their sleep, one died, one survived but remained blind – overshadowed his brilliance as one of the unheralded modern giants of jazz trombone.

The momentum of the riff-based Angel Cake is sustained throughout by Richie Kamuca, whose semi-breathy lines are underscored by Basie-like shout choruses. Sonny Clark devoures Why Do I Love You at breakneck speed and flavors his Bud Powell-influenced bop phrases with hard blues licks and sparse dissonance. The down-home Blues At Sunrise is a showcase for Conte Candoli, who bookends a long but not long-winded solo with bright and penetrating open horn with the melody statement and conclusive ad-libs on muted trumpet.

Levey steers along his men with authority. No way some sunny climate was suddenly going to be responsible for the evaporation of Levey & Co’s hard-core jazz aesthetic.