Approximately seven years into his recording career, Blue Mitchell hit his stride on Blue Note with one of his greatest efforts, The Thing To Do. 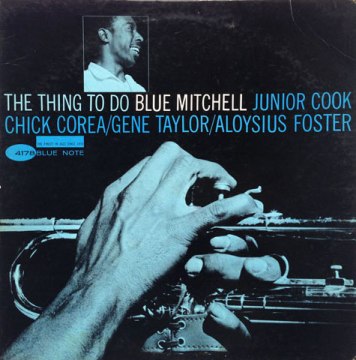 Side A:
Fungii Mama
Mona’s Mood
The Thing To Do
Side B:
Step Lightly
Chick’s Tune


Can’t go wrong with Blue Mitchell. Among the young and spectacular trumpeters of his generation – Lee Morgan, Freddie Hubbard and Donald Byrd – Mitchell held his own employing supple phrasing and a bright tone, adhering to the motto’s of less is more and what you see is what you get, his stories back flipping in a bowl of soul. He made his first string of records for Riverside, introduced by, who else, Cannonball Adderley. He subsequently switched to Blue Note in 1963, a perfect fit. The accessible Mitchell, cast in the warm and transparant Blue Note mould by Rudy van Gelder, went down well in the black community, a successful addition to Blue Note’s mainstream roster till the end of the decade, well into the “United Artists” period of Blue Note after the retirement of Alfred Lion. Mitchell furthermore recorded mostly for Mainstream and found a home in the band of British blues star John Mayall in the early 70’s, who was a devoted fan of Mitchell’s work with Horace Silver. Mitchell died prematurely in 1979.

Ain’t everyone of us crazy about that particular edition of the Horace Silver Quintet. Between 1959 and ’63, Mitchell appeared on, among others, Finger Poppin’, Blowin’ The Blues Away and Doin’ The Thing, all of those with tenor saxophonist Junior Cook and all of those Silver classics. A sought-after trumpeter, Mitchell cooperated with Cannonball Adderley, Jackie McLean, Elmo Hope, Stanley Turrentine, Hank Mobley and Dexter Gordon, as well as Hammond organists Jimmy Smith, Don Patterson, Freddie Roach and Big John Patton.

Jazz is a music of sidemen figuring out a new strategy. Basie ran with the Moten band. Former Miles Davis associates Wayne Shorter, Joe Zawinul and Miroslav Vitous formed Weather Report. And Mitchell hooked up with Cook and bassist Gene Taylor from the Silver band, rounding out his new quintet with the promising pianist Chick Corea. In the comfort zone of his pals and confronted with the fresh voice of Corea, Mitchell delivered a sprightly gem.

The Thing To Do has always struck me as an excellent starter for burgeoning jazz fans, very well capable of sharing that virtue with The Sidewinder or Moanin’. It’s joyful, smooth, relaxed but energetic and features a classic opening tune, Fungii Mama, underlined by a calypso rhythm that never fails to ignite a broad smile and occasionally – one easily imagines – a bit of buoyant shaking of the hips. Corea’s catchy The Thing To Do is marked by the composer’s suspenseful alternate chords and poignant, Monk-like comping. He cuts the meandering lines of an invigorating solo in half with two brash chords. The combination of the typical Blue Note line-up – bright trumpet, smoky tenor – with Corea’s mix of blues stylings and slightly edgy shenanigans is this session’s extra treat. Also, shout choruses and the alternation of riffs behind the soloists keep things zestfully movin’ and signify the influence of Mitchell/Cook’s former boss, Horace Silver, who himself in this respect was influenced by Count Basie.

The Thing To Do was Mitchell’s debut record on Blue Note. Step Lightly, his first session on Blue Note in 1963 featuring Joe Henderson, Leo Wright and Herbie Hancock, wasn’t released until 1980. A different and very good ballgame, but arguably The Thing To Do, which also included Joe Henderson’s great blues tune Step Lightly, was the best choice for Mitchell’s start on the legendary label. Lovely, soulful stuff.