Mal Waldron is like a calf breaking loose in springtime. Jumping the fence! 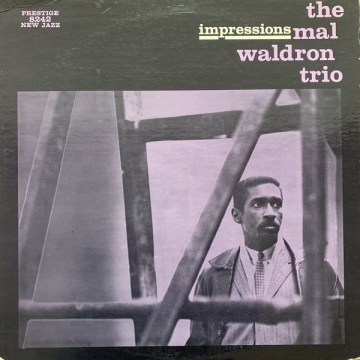 Side A:
Les Champs-Elyseés
C’est Formidable
Ciao
Side B:
You Stepped Out Of A Dream
All The Way
All About Us
With A Song In My Heart


You can count on Mal. In 1956/57, Mal Waldron was the house pianist of Prestige Records, partaking in a string of sessions with John Coltrane, Gene Ammons, Kenny Burrell, Jackie McLean and The Prestige All-Stars. The New York City-born Waldron (1925) also was responsible for a steady supply of tunes. There seemed no end to the slight inventions on blues-based material and the chords sequences of the American Songbook by Waldron, who gave the world song titles as Anatomy and Vodka. Waldron’s best-known composition is Soul Eyes, written for Coltrane in 1957 and an instant standard. Waldron furthermore accompanied Billie Holiday during the last phase of her life.

He also worked with Eric Dolphy, which is documented on 1961’s At The Five Spot Vol. 1 & 2 and Memorial Album. A remarkable cooperation, climaxing with Waldron’s The Quest, also from 1961, bull’s eye, rocket ship whirling around Jupiter, knockout punch, crackerjack classic must-hear. So already, while working in the mainstream, Waldron’s adventurous urge had become evident. He delved avant-garde territory for the biggest part of his career. I have to confess that I’m not really familiar with Waldron’s subsequent career, excepting the odd records, which were unable to hold my attention. There will be readers of the opposite persuasion, avant-garde fans that find early Mal Waldron less charming and important, and that’s fine. Throughout, Waldron maintained a special rapport with soprano saxophonist Steve Lacy, beginning in 1958 with Lacy’s New Jazz album Reflections, an outstanding program of music by Thelonious Monk.

I did see Mal Waldron perform at the latter stage of his life at Bimhuis, Amsterdam, in cooperation with Lacy, trombonist Roswell Rudd and bassist Reggie Workman. (I have forgotten who held the drum chair) Waldron played an intriguing minimal style at that point of his career. Some guy in the audience, most likely inebriated, apparently was not enamored by Waldron’s minimalism and shouted: “Wake up, Mal!” Bad. Very bad and insulting. I threw my beer into his neck. It was quite an ugly scene.

That was 1999. And partying like it was 1999. Back to March 20, 1959, the last few months in the home studio of Rudy van Gelder at Hackensack, New Jersey. Waldron working out in a trio setting with bassist Addison Farmer – brother of Art Farmer – and drummer Albert “Tootie” Heath. Waldron’s swing is quirky, his style angular and uncompromising. I never met anyone who cited Waldron as his favorite pianist. Perhaps understandably, Waldron is quite a willful fellow, opening the slide doors of the saloon, cigar in corner of mouth, hat tilted dangerously to the left, brooding… Creeping under your skin. But delivering the goods and definitely good at heart. Mal Waldron is a tattoo’d health care worker.

Waldron turns Hackensack into Paris – Les Champs-Elyseés, a frivolous melody seguing into bursts of notes that alternate between stubborn repetition and speeded-up percussive dives into Monk-land. Perhaps Waldron visits Brussels as well, where Waldron migrated to in the late 60s – C’est Formidable, a lovely waltz. He takes a weekend trip to Italy – Ciao – and eventually travels back to the USA with You Stepped Out Of A Dream, All The Way, With A Song In My Heart and All About Us, an original composition with a lovely loping tempo by Waldron’s wife, Elaine. Waldron’s extremely slow, darkly romantic take of You Stepped Out Of A Dream is juxtaposed with the fast and loud version of All The Way, with its booming and ringing chords, phrases hammered like bolts in a concrete wall.

Ciao is even more relentless, a Ferrari driving at top speed. Waldron’s preoccupation with repetitive motives is maddening, confusing but strangely satisfying, held in suspension by his constant variation of touch, his clipped left hand chords and underlying bass lines, going on and on, for about 5 minutes. It’s an attack and Rome most definitely is conquered. If anything, it might be defined as rock & roll jazz.