There has been a great number of Horace Silver tribute albums over the decades. But few if any come as crisp as one of the earliest efforts by The Mastersounds from 1960, Play Compositions By Horace Silver. 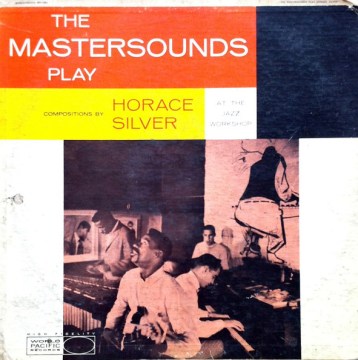 
The Mastersounds, consisting of two Montgomery brothers – Buddy on vibraphone, Monk on electric bass – pianist Richard Crabtree and drummer Benny Barth, recorded a string of albums on World Pacific during their all-too brief existence from 1957 till 1961. One of those, Kismet, featured their brother, the gifted, groundbreaking guitarist Wes Montgomery. The concept of the West Coast-based Mastersounds was built around the earthy, fluid vibes playing of Buddy Montgomery and was a notable playground for the pioneering electric bass style of Monk Montgomery. Monk started using the Fender bass as early as 1952 in the Lionel Hampton band and was the first to play electric bass on a jazz recording on the Art Farmer Septet recordings in July, 1953. It is generally agreed that he in effect was the first to record electric bass in any genre.

Arguably the highlight of their career, Play Compositions By Horace Silver is marked by relentless, tight-knit group swing and Buddy’s sprightly, soul-drenched vibraphone excursions. Not to mention Monk’s successful attempts of adding groove and walkin’ bass magic with the electric bass. The Mastersounds play as a bunch of young and hungry lions. Very similar to the other great West Coast soul jazz and hard bop group, The Jazz Crusaders. (Buddy and Monk were associated with some of the members of this group at regular times during their careers)

Crabtree’s finest hour occurs during Doodlin’, his probing, fleet lines gracing the group’s lively take on Silver’s down-home classic. Monk Montgomery takes an expert solo, quoting Franky And Johnny in the process. The Mastersounds’ versions of Ecaroh and Nica’s Dream are quicksilver gems. Enchantment and Moonrays are interesting choices of the Silver repertory. Enchantment leans a bit towards long-windedness. Moonrays is a gush of fresh air. Like Silver’s music, its fluid bounce effortlessly arouses a singularly jubilant feeling in the listener.