Milestones still stands tall as a marvel of balance and power. 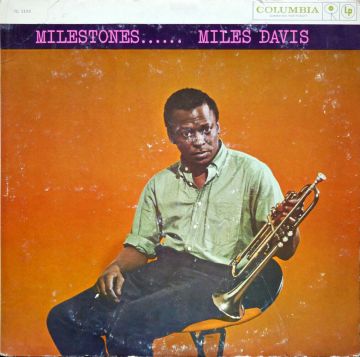 Side A:
Dr. Jekyll
Sid’s Ahead
Two Bass Hit
Side B:
Milestones
Billy Boy
Straight, No Chaser


There isn’t much more to ask for in mainstream jazz land than a listen to the First Great Miles Davis Quintet, augmented as a sextet with the inclusion of Cannonball Adderley on Milestones. The band, featuring John Coltrane, Red Garland, Paul Chambers and Philly Joe Jones, had been together for two years and its discography consisted of the series of Workin’, Relaxin’, Steamin’ and Cookin’ on Prestige and ‘Round About Midnight on Columbia, all classics in the hard bop canon. Milestones prefigures the most popular album of all-time, the modal masterpiece Kind Of Blue. The title track – titled Miles on the first pressings to avoid confusion with Davis’ earlier and different composition of Milestones – is the first attempt of Miles Davis at modal jazz.

The harmonic idea of using scales instead of chords is not a Miles Davis innovation – he codified and popularized it. And typically, he was involved in its inception. Pianist and composer George Russell, who wrote The Lydian Chromatic Concept Of Tonal Organization as the backbone of the innovation and co-wrote the modal-tinged Cubana Be/Cubana Bop for Dizzy Gillespie in 1947, once said that the 18-year old Miles Davis inspired him to develop the theory with a remark in 1944: “Miles said that he wanted to learn all the changes and I reasoned that he might try to find the closest scale for every chord.”

The seeds were sown and eventually developed into a big tree with the release of the modal masterpiece Kind Of Blue. However, it was preceded by the Milestones composition. And it’s the standout tune of the album. Based on two scales, the first relatively simple melody is stated fluently, while the second melody is more staccato. While offering a fresh wave of space for the soloists that was heretofore nonexistent in the chord-driven era, there also exists proper tension between the scales, keeping Cannonball, Davis and Coltrane on their toes. Plainly wonderful. Cannonball Adderley is first in line, which shows you that Miles Davis had the utmost respect for the blues-drenched, Charlie Parker-influenced alto saxophonist from Florida. Five days after Milestones, Miles Davis and Cannonball Adderley recorded the perennial favorite Somethin’ Else on Blue Note. It was a Miles Davis session but the Dark Prince offered leadership credits to Adderley. Adderley would, of course, be an important constituent of Kind Of Blue.

The three concise statements of Adderley, Davis and Coltrane during Milestones are marvels of economy and smooth propulsion. The way Davis uses space is especially brilliant and undoubtedly influenced the tales of his companions. His subtle and dark-blue, slight bending of notes is the finishing touch, always delivered at the exact right moment in time. Davis perfected his kind of blue-isms with the Harmony mute, but sticks to the open horn on the Milestones album – one of the reasons yours truly is particularly enamored by it. Davis continues his economy of phrasing throughout the session, quoting When The Saints Go Marching In in both Dr. Jekyll and Sid’s Ahead. Couple of saints at work right there in the studio of Columbia at 30th Street, Gotham City.

Jackie McLean’s bop tune Dr. Jekyll (Dr. Jackle on the original pressings) is distinctive for Philly Joe Jones and Paul Chambers’ snappy backing of the soloists. Generally accepted as a powerful battle between Coltrane and Adderley, I for one am not particularly fond of the frenzied trading of eights and fours between them. The raucous tombola of notes from Coltrane as the sole protagonist during the outstanding, tight-knit cooker Two Bass Hit is more successful, not to say spectacular. Thelonious Monk’s Straight No Chaser – John Coltrane’s rapid development from Davis, Monk and back to Davis again is the stuff of myth – moves along at a leisurely swinging pace. Davis fluffs a note during the end sequence. The fact that Davis agreed on the release of the best take of the afternoon regardless of his imperfect ending speaks volumes about the so-called Dark Prince’s generosity and professionalism.

Sid’s Ahead is a relaxed blues reworking of Walkin’, one of the starting points of hard bop from the Davis bag from 1954. Red Garland had a beef with Davis and walked out of the session. Davis switched from trumpet to piano. Perhaps as a result of the well-worn changes Paul Chambers is daydreaming and introduces his first solo statements while Cannonball seems to obliviously move on into his next chorus of soloing. Or do they miss the expert and forceful accompaniment of Red Garland? Or were the vibes temporarily cast in gloom because of Red’s sudden absence? Perfect irony: Garland was granted a piano trio feature that made it to the release. With sound reason, because Billy Boy is vintage Garland, a swinging, fluent, coherent mix of single lines and his innovative block chords. The spectacular bowed bass part by Chambers is the cherry on top.

A gathering of giants, with top form Miles Davis at the helm.