After all these years, the dark-hued adventures of Wayne Shorter on Blue Note have lost nothing of their mysterious charm. 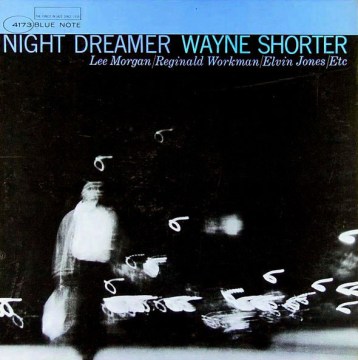 
Dutch bassist and jazz scholar Hans Mantel once asked Wayne Shorter if he was conscious of creating stone-cold classic albums on Blue Note in the sixties. The tenor and soprano saxophonist’s answer was: ‘What you young cats must realize is, is that we made our records to pay our rent!’

Gold coins from the Byzantine period fade into insignificance compared with the run of Blue Note platters by Wayne Shorter. The tenor and soprano saxophonist, best known by the general public for his role in the Second Great Quintet of Miles Davis and fusion group Weather Report, still going strong today as ‘the greatest living jazz composer’, started off his stretch on Blue Note as a leader with Night Dreamer in 1964. It preceded the perennial favorites and classic albums Juju and Speak No Evil.

Significantly, Shorter’s debuting run of albums on VeeJay in the late fifties and early sixties consisted almost solely of original compositions. As part of Art Blakey & The Jazz Messengers from 1959-64, Shorter also contributed a slew of fresh, exciting tunes. Furthermore, the Newark, New Jersey-born saxophonist showed his prowess as an original tenor man. As the years went by in the acclaimed and propulsive Blakey outfit, Shorter’s solo’s grew more explorative and explosive. His roaring tale during the rousing modal Shorter composition Free For All is plain crazy. A raid of hand granates kicked back by Blakey in equally tempestuous fashion. Shorter carried over that vibe to Night Dreamer, drawing on the energy of another legendary drummer, Elvin Jones. He stretches his limits song-wise, presenting a set of haunting compositions that are unusually structured but nevertheless flow effortlessly like the meandering side branches of the Euphrates or Tigris.

Where to begin? Any song writer would’ve been happy to deliver the moody melodies of Oriental Folk Song and Virgo. However, the key pieces are Night Dreamer, Black Nile and Armageddon. The whole package – structure, mood, energy, interaction – is perfectly balanced, like an essential performance of a Mozart symphony, with the remarkable difference, the ultimate feat that distinguished jazz from any other music form, that the core of Night Dreamer is spontaneous improvisation.

The album features trumpeter Lee Morgan, Shorter’s frontline partner of The Jazz Messengers, bassist Reggie Workman and the powerhouse duo that was part of the epic John Coltrane Quartet, pianist McCoy Tyner and drummer Elvin Jones. Masterclass of depth and hard swing guaranteed. The pushing and pulling of the beat and wide open spaces of Elvin Jones and the extravagant and tasteful piano excursions of McCoy Tyner cannot fail to be a stimulus to original reed and brass players like Shorter and Morgan. Shorter is a dark prince lurking in the shadows, occasionally darting out of the corner, growling ominously, reciting ancient poetry, the stanzas streaming out of his mouth like wine from a bottle: enigma. Morgan is the florid touch, hard bop royalty, weaving in and out of modal spheres fluently, shooting multiple straight arrows, cocky and convincing: brilliant sleaze. He’s the uplifting opposite of Shorter, who is a demon driving away demons.

Shorter’s sound may not be as characteristic as the tone of great contemporaries or past masters but his compositions never cease to amaze. The nocturnal Night Dreamer hinges on the subtle balance of relative chordal simplicity and depth of feeling and the suave and surprising storytelling by Shorter. The relentless drive is one of many striking aspects of the modal cooker Black Nile. The long, beautiful lines of Armageddon contrast with the booming in-your-face rhythm, the furious rolls and switch of polyrhythm to explosive shuffle groove by Elvin Jones. Expressiveness is the focus of a composition with a minimum of subtly moving chords. Shorter and Morgan rise to the occasion.

The mood nocturnal, with a sense of foreboding and inner turmoil that’s crystallized in a curious state of serenity, Night Dreamer is akin to Herbie Hancock’s Empyrean Isles and Andrew Hill’s Judgement. The avant-leaning catalogue of Blue Note, that daring mid-sixties series of albums from Shorter, Hancock, Hill, McLean and Hutcherson that require repeated listening. Label boss Alfred Lion gave his roster of adventurous talents free reign, very insightful from the legendary independent record executive. To boot, Lion even paid for rehearsal time. And so, in a way, for the rent of the Shorter family’s apartment somewhere deep in the bowels of The Big Apple.