Quirky rhythm is the business of the New West Quartet. 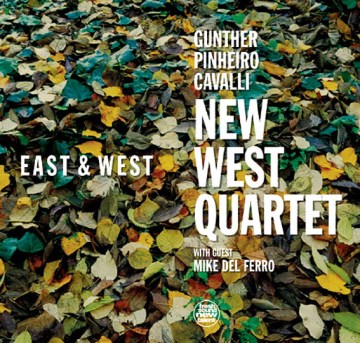 on June 8, 2017 at Estúdio Vale de Lobos in Lisbon, Portugal


The New West Quartet consists of tenor saxophonist John Gunther, guitarist Ricardo Pinheiro, bassist Massimo Cavalli and drummer Bruno Pedroso, featuring pianist Mike del Ferro on a number of tracks. Pinheiro and Pedroso are from Portugal, Cavalli from Italy. They met the American saxophonist and woodwind player Gunther in 2003 in Denmark and Dutchman Del Ferro in South Africa in 2014 through their work for the International Association of Schools Of Jazz. East & West is their debut album.

An unconventional but unmistakable groove runs level with impassioned musical conversations and a rapacious concern with melodic rhythm. Gunther’s The New West, for instance, is reminiscent of, just to give you an idea, John Scofield’s A Go Go, without the Hammond organ. Except Pinheiro and Gunther break out of the grease, in fact travel out there in space, two alien creatures absorbed by a lively evaluation of that peculiar animal, the earthling.

Four fellows (indeed five, counting Del Ferro) speak both individually and as a unit. The group’s edgy interpretations of the blues – Cavalli’s Boulder Blues and Pinheiro’s Poka Blues – leave plenty of room for the lyrical Cavalli, who evidently, and to our great pleasure, highly esteems the value of the upright bass not only as a time-keeper but also as an independent voice. Simultaneous improvisation pops up here and there and is at the core of Cavalli’s Don’t Forget Ornette, obviously a reference to the late Mr. Coleman. The bassist’s humorous quote of Deep Purple’s Smoke On The Water is at the tail end of the challenging, captivating tune of sparse harmonic movement and shifting tempo. Pinheiro’s Pó Dos Dias and Gunther’s Que Falta are sensuous slow and medium-slow songs, dripping with hot Mediterranean sunlight and humid nights, the web of twisty alleys barely noticeable through the fog… Enjoyable side dishes to the grand improvisational boeuf of East & West.

The melody of John Coltrane’s Moment’s Notice is a funky kind of polka, the remaining changes are taken in gritty 4/4. Gunther – on tenor saxophone – is an archeologist who patiently looks for ancient clues in a cave. He develops a story with measured grace, injecting a husky bended note here, a vivid U-turn there. Gunther’s got a lithe tone and a fluidity reminiscent of Clifford Jordan. Del Ferro expresses similar elasticity. Thelonious Monk’s Bye-Ya has been more of less cha cha cha-fied. Pinheiro works around the beat with much aplomb. He has found a fascinating balance between angular phrasing, sinuous, exotic lines and crunchy, repetitive licks.

Weirdly, The New West Quartet wouldn’t be out of place in a little bar in Havana, Cuba or Rio de Janeiro, Brazil. Without a doubt, the rowdy and thoroughly entertained crowd would intuitively grasp the group’s excellent and refreshing re-evaluation of mainstream jazz.