For Buddy Terry, natural soul is the music of the church, the street and John Coltrane. 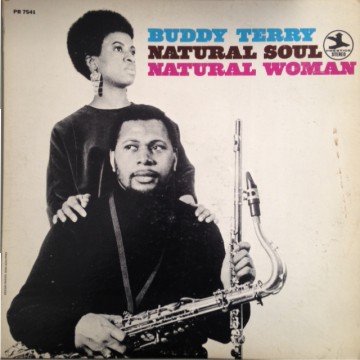 Side A:
Natural Woman
Natural Soul (Sunday Go To Meetin’ Blues)
Pedro, The One Arm Bandit
Don’t Be So Mean
Side B:
The Revealing Time
Quiet Days And Lonely Nights


The legendary Prestige label had added soul jazz to its cutting-edge modern jazz catalogue in the early sixties. In fact, by putting numerous hi-profile advertisements of their stock in magazines like Downbeat, continuously stressing the ‘soul’ of Eddie “Lockjaw” Davis, Shirley Scott, Jimmy Forrest, Groove Holmes, Gene Ammons and many others, it was a deciding factor in the invention and popularization of soul jazz. By the late 60s, when interest in mainstream jazz dwindled, Prestige focused on funky, bluesy jazz in sync with contemporary popular music and its buying public. So you’d get the barroom organ blues of Sonny Philips or the mean, greasy tenor of Houston Person, who scored one of the last Prestige hits with Jamilah. And Prestige had signed tenor saxophonist Buddy Terry, who’d assisted organist Freddie Roach on Soul Book in 1966. Terry released his debut album as a leader, Electric Soul in 1968. You mean like, soul? In the late sixties, label boss and artists of Prestige still didn’t have to think twice about picking titles.

Buddy Terry had played in the organ groups of Rhoda Scott, Dee Dee Ford, Dayton Shelby and Larry Young and cooperated with Sonny Rollins and Johnny Coles. A couple of years were spent in the band of Lionel Hampton. For Natural Soul Natural Woman, the tough tenor with a ‘far out’ edge assembled his Newark, New Jersey pals – pleasant surprise! – Larry Young, Woody Shaw and Eddie Gladden, weathered cats like tenorist and flutist Joe Thomas, as well as the so-called Terry Girls on vocals – perhaps including the beautiful lady on the front cover? So then you get Don’t Be So Mean, a lurid boogaloo tune with a tacky twist, absolutely the album’s highlight. You get Pedro, The One Arm Bandit, obscure folk music jazzed up upliftingly, following the path Rollins famously paved.

You get Natural Woman, Aretha Franklin’s anthemic soul ballad, that features the Terry Girls and Buddy Terry hollering mercy, mercy; Quiet Days And Lonely Nights, a solid ballad. And finally, The Revealing Time, a mid-tempo blues that passes the 11-minute mark, ample opportunity to stretch out for Terry and Young. Woody Shaw only has short bits of solo space. Honestly, the brilliant, last great innovator of the trumpet’s worthwhile statements are overshadowed by rather lackluster, staccato ad-libs. Sleepy, perhaps.

Buddy Terry, on the other hand, is spry as the cow that line-dances onto the field in Spring. He’s a minister arousing the flock. And a captain of the Enterprise reaching out to the aliens around the Ring of Saturn. His dirty playing style and harmonic sophistication brings to mind Eddie Harris. Buddy Terry took matters in his own hands and also provided the liner notes to his album of raucous soul jazz. A curious mix of bio and exegesis. Terry states: “The entire album is my song of praise to God.”