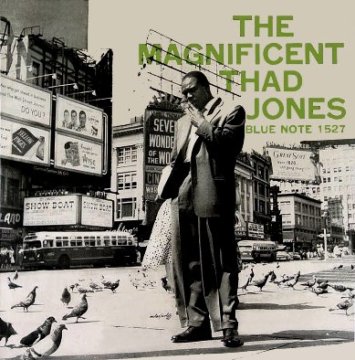 Side A:
April In Paris
Billie-Doo
If I Love Again
Side B:
If Someone Had Told Me
Thedia


The year 1956, hard bop has been gathering substantial steam for a few years now. The Magnificent Thad Jones is on some level affected also by the fresh extensions of modern jazz that Horace Silver, Miles Davis, Lou Donaldson and Art Blakey introduced. The album’s harmonic textures run along bop’s course, it includes bop-inflected phrasing, particularly by tenor saxophonist Billy Mitchell and pianist Barry Harris. However, the stress is on bouncy mid-tempos typical for hard bop instead of fast, familiar bop tempos, the mood is relaxed but vivacious and Jones introduces clever writing with one of two original compositions, the blues-based Billy-Boo and, especially, Thedia. Two seldom played standards, Murray/Oakland’s If I Love Again and DeRose/Tobias’ If Someone Had Told Me, alternate with the well-known, beautiful melody, April In Paris.

It is often said that talented musicians that hailed from the same city and have come to try and conquer the jazz capital of the world, New York, often had a special rapport as a result of their mutual background. Perhaps it is still like that today. Assisted by Percy Heath from Philadelphia and Max Roach from New York, the three remaining Detroit-raised guys, Harris, Mitchell and the leader, Thad Jones, indeed gel particularly well. Harris, by then already a long-time devoted bop pianist with an encyclopedian knowledge of Monk, Powell and standard melodies, and a mentor to John Coltrane, Charles McPherson, among others, is the personification of glue, his resonant harmonies and concise tales provide refined support and sparkle. Max Roach, VIP bop veteran, incubator of the finest hard bop with Clifford Brown, balances fervent and delicate swing. His alert, melodic ear is virtually unparalleled. During the ensembles, the full, punchy sound of tenor saxophonist Billy Mitchell blends well with the happy-blues-sounds of Jones, and Mitchell regularly chimes in with short, resonant, smoky statements.

To get you into this place where time stands still. Not a place that’s safe from the outside troubles, but perhaps instead a state wherein you chew on them, let them heat like hotcakes on a stove, live through them, to come out of them somehow cleansed. If that is the purpose of good jazz, April In Paris, the opening track of Thad Jones’ The Magnificent Thad Jones, is a winner. And winner takes all. There’s a loping gait to the standard of Vernon Duke and Edgar Harburg that’s exquisite, courtesy of the precise flow of bassist Percy Heath, the lush backing of pianist Barry Harris and the conversational coloring of Roach, who drives this band home with sensitive hi-hat and crystalline ride cymbal drumming.

And courtesy definitely of Thad Jones. If a diamond could blow, it would probably sound like Thad Jones on his second album for the Blue Note label. Moreover, the moving story of the trumpeter and future bandleader of the renowned Thad Jones/Mel Lewis Orchestra is a poignant amalgam of ideas strung together from series of keenly divided notes, the silence between them functioning as the apex of improvisational flow and coherence. It’s a story that runs over several choruses, and Jones keeps it simultaneously relaxed and intense, on a constant high level. His solo of Thedia, a beautiful, boppish, elongated line is longer still and an example of taste and sustained energy.

There’s something special about the trumpet sounds that Van Gelder recorded in Hackensack, New Jersey. Jones has become one of those angels blowing from the upper celestial plateau, the tone full and sensual like a female body on a Rubens painting, juicy like the flesh of the blissful orange, a perfect blend of sweet and sour. Yes, Charles Mingus said that Rudy van Gelder messed up everybody’s sound, depersonalized it through his innovative but all too strict methods. It’s a valid statement. But did Mingus mean it? This comes from a bandleader who told every sax player he worked with not to play like Charlie Parker. Yet Charles McPherson, a singular player yet more firmly steeped in the Parker tradition than most of his colleagues, played longer than anybody in the Mingus band except for drummer Danny Richmond. Regardless, the sound of ‘RVG horns’ and in this case, Thad Jones, is fantastic. The overall production is bliss. The execution, focus and mellow drive of the quintet are exceptional. The Magnificent Thad Jones is a perennial favorite for lovers of classic mainstream jazz and will undoubtedly attract newcomers for years to come.