The Dutch-American crew of bassist and composer Marius Beets delivers the outstanding This Is Your Captain Speaking. 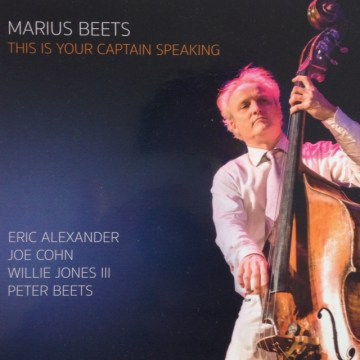 
Hypes come and go and boundaries are being crossed every time a Chinese tourist says cheese. It is easy to overlook that around the world real jazz albums also keep appearing with the regularity of the clock. Also in The Netherlands, which has a solid mainstream jazz scene, a great history of welcoming American musicians and, in the guise of Marius Beets, one of its most prominent bass players. Beets released This Is Your Captain Speaking on his Maxanter label. The album includes tenor saxophonist Eric Alexander, pianist (and brother of Marius) Peter Beets, guitarist Joe Cohn and drummer Willie Jones III. They perform ten original compositions by bandleader Marius Beets.

So there’s the cream of the crop delivering high-level improvisation, swing and a healthy dose of blues, inspired by the catchy and challenging tunes of Marius Beets. Eric Alexander is a master of execution who loves to explore the sonic extremes of his instrument. His seemingly effortless integration of these idiosyncracies in his stories, in themselves an ongoing evaluation of the work of Alexander’s heroes like George Coleman and John Coltrane, is striking. He enlivens the boppish The End Of The Affair and the Latin-type line of Dextro Energy with hip twists and lurid fragments of scales. The ending of his remarkably crafty solo during This Is Your Captain Speaking, a clever, blues-based Horace Silver-ish tune, is a bossy bark that must’ve cracked up people in the studio.

62-year old Joe Cohn, the son of saxophonist Al Cohn, who uses a prickly yet full sound, is never short on ideas, which he strings together with staccato notes and supple single lines. He sets fire to Tafkamp Is Still On The Scene, a funky vamp that segues into a driving 4/4 section. The interaction of Marius and his brother Peter, internationally acclaimed pianist, is special, perhaps not surprising considering their life-long association. Emandem especially reveals their subtle interplay of bass lines.

The abundance of hard bop/post bop makes This Is Your Captain Speaking highly enjoyable. The funky ode to Cannonball Adderley, Brother Julian, boogaloo-based Moody’s Groove and The One And Only, an album highlight in the tradition of mid-sixties avant-leaning Blue Note point out the group’s versatile use of the mainstream jazz language. Besides, the group also plays sweet and light – El Capitano, Carpe Diem. The overall sound is, in fact, pleasantly light without becoming lightweight. The crisp and clear sound of the crackerjack drummer Willie Jones III’s ride cymbal underlines that particular canvas. It is a contemporary sound, but also has a foot in the past, the early 70s Muse/Strata-East ‘feel’ in particular. The album is recorded at the studio of Beets, who partakes in myriad musical activities beside bass playing.

You can count on Marius Beets, the bass player. He’s a tasteful, highly skilled accompanist with a tremendous bottom groove. Beets also delivers a number of melodic solos with sustained momentum. Not only did he write an album of superb tunes, he also picked a world-class crew. Not a trace of hesitation by these gentlemen. Dig those solo entrances, time and again! Those are a joy to listen to, as much as the excellent development of their stories.

Check out album info and the website of Marius Beets here.