Junior’s Cookin’ is the only album as a leader in the sixties from tenor saxophonist Junior Cook. Superb hard bop date. 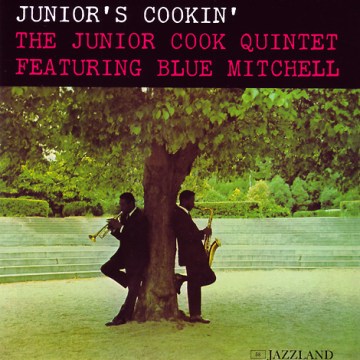 
How many references to cookin’ can you handle? Following his debut as a leader, Junior’s Cookin’ from 1962, the 70s and 80s saw the release of Pressure Cooker, Good Cookin’ and Something’s Cookin’. Of course, there’s a close relationship between jazz and food, depending on how far you want to take it. If you don’t mind me traveling a couple miles from home base, I won’t hesitate to state that more often than not, you can just smell jambalaya, kidney stew or ribs in the juicy notes of Louis Armstrong, Brother Jack McDuff, Lee Morgan, to name a few… I’m pretty sure this can’t be applied to classical music, which as a principle is non-spontaneous. (Though it once was common practice, as brilliant composers and pianists like Franz Liszt reportedly did, to partly improvise) But perhaps you disagree and feel very strongly the taste of Sachertorte in the waltzes of Johann “Fledermaus” Strauss.

What’s cookin’? Well, the group of Junior Cook, sous chef of the Horace Silver Gourmet Restaurant. (Just one last cheesy culinary reference to end all matters) Junior Cook, born in Pensacola, Florida in 1934, deceased in NYC in 1992, came into prominence with the hard bop pioneer’s group, blending particularly well in the ensembles with Blue Mitchell, who’s his superb and lively mate on this album as well. As a matter of fact, also present on Junior’s Cookin’ are bassist Gene Taylor and drummer Roy Brooks, who were part of the Silver line-up including Cook and Mitchell as well, a group that existed from 1958 to 1964 and is by many regarded as the essential Silver band. After his stint with Silver, Cook was in Mitchell’s band from 1964 to 1969. He also played in trumpeter Freddie Hubbard’s group from 1971 to 1974. Notable albums on which Cook is featured are Horace Silver classics as Finger Poppin’, The Tokyo Blues and Doin’ The Thing, Kenny Burrell’s Blue Lights Volume 1 & 2, Barry Harris’ Luminiscence and Cedar Walton’s Cedar.

With this line-up involved, effortless swing and crisp group interplay are guaranteed. Myzar, one of four Cook original compositions, is a splendid example of Cook and his group’s hi-quality hard bop. An Eastern-tinged brass and reed melody underscored by a repetitive Senor Blues-type piano figure, which moves smoothly forth and back to the crisp, straightforward swing section. Cook’s cookin’, yes. Not to be mistaken with cookin’ in the sense of riffin’, stringing together exciting but loose-jointed blues phrases. Far from it. Albeit graced with an abundance of blues feeling, Cook’s playing is remarkably balanced. Taste written all over it. A heir to Hank Mobley, in this respect. Also a Silver alumnus, from the pioneering line-up of The Messengers of late ’54 and early ’55 to late ‘56, to be precise. His mates in the frontline were Kenny Dorham and Donald Byrd. Mr. Silver had an ear for exquisite and smokin’ tenorists and trumpeters.

It’s interesting to take a listen to Cook’s late career period. It could be argued that it is evidence of the man’s patient, dedicated, disciplined intensification of his hard bop tenor art. Take a listen to the Cook/Louis Hayes LP Ichi Ban, Louis Smith’s Prancin’, Bill Hardman’s What’s Up or Clifford Jordan’s Two Tenor Winner. To be sure, I do not intend to assume that Cook’s work with Silver was immature. On the contrary! However, would it be a farfetched line of thinking that Cook was balancing his act with Silver, not really a driving force of that group but instead precisely tying the knots of Silver’s intricate, blues and gospel-infested compositions? Later in life, evidently, Cook’s work gained depth and, though still very composed, is characterized by more edgy twists and turns and a delivery that hints at a heart that has been burning from all sorts of sweet or sour experiences.

I don’t think Cook is alone in this. Plenty of saxophonists that shone brightly in the classic age of hard bop but matured further into their careers. Like Clifford Jordan, Charles McPherson, Jimmy Heath, Harold Land… Wisdom comes with age. Wrinkles too, although, and perhaps you know that feeling, they’re the least of my troubles.