Horace Silver’s first album with his most celebrated line-up, Finger Poppin’, still stands tall after all these years as a penultimate example of hipness and swing. 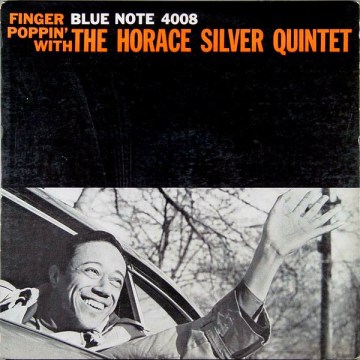 Side A:
Finger Poppin’
Juicy Lucy
Swingin’ The Samba
Sweet Stuff
Side B:
Cookin’ At The Continental
Come On Home
You Happened My Way
Mellow D.


What else? Everybody obviously knows that feeling. I’m not talking about George Clooney’s cup of espresso but of the series of Blue Note albums that Horace Silver made in the late fifties and early sixties. Desert island stuff of such a unique blend of blues and sophistication that effortlessly produces the feeling that all other music besides Silver’s might be redundant. It’s damn perfect. Meaning, not near-perfect. Hard bop heaven. Finger Poppin’ is classic Silver. For the first time, trumpeter Blue Mitchell, tenor saxophonist Junior Cook and bassist Gene Taylor are aboard. The quite unique ensemble playing of Mitchell and Cook, who took with them a lot of experience in r&b groups, gave the already impressive compositions of Silver a buzz, especially noticable in the uptempo cooker Cookin’ In The Continental. Silver was quick to capitalise on their talents, injecting nifty shout-choruses in the tune, that effectively catapult the soloists into action.

Lots of other crafty devices set Silver’s music in full bloom, elaborate compositions which nevertheless flow naturally like mountain streams. Silver penned eight major league tunes, ranging from catchy swingers like Finger Poppin’ to the lyrical ballad Sweet Stuff. Juicy Lucy is one of the most irresistable songs around. Bluesy as hell, it features the amazing sense of taste and clarity that runs through the whole set, clarity of both song structure and solo’s. Not only the master himself tells a well-balanced tale with slightly behind-the-beat, swinging lines, dense, probing chords, a delicate use of space, Cook and Mitchell, relatively unknown musicians at that time, strike the listener as remarkable storytellers.

All this soulful comping and blowing is underscored by drummer Louis Hayes, who is one of the great masters of the hard bop era, certainly as far as reinforcing a band is concerned. Practically on his own, Hayes sets fire to Silver’s trademark Latin tune for this set, Swingin’ The Samba. The propulsive time of his ride cymbal and crisp, spot-on snare rolls hit the cookin’ tunes right out of the ballpark. Hayes had been aboard the Silver train from 1956, a remarkable stretch for the drummer, who would go on to write hard bop drum history with Cannonball Adderley and on Blue Note albums as Kenny Drew’s Undercurrent. Among many other endeavors. After 1959’s Blowin’ The Blues Away, Hayes would be followed up by Roy Brooks.

The best line-up? Every group has its assets. Cast your mind back to the original Mobley/Dorham frontline and Art Blakey groove. Or the daring, lively Henderson/Shaw contributions to Cape Verdean Blues. At any rate, as far as coherent group sound and effortless, blues-drenched swing is concerned, Silver’s group with Cook/Mitchell is unparalleled. Enough to drive you out of your mind. And if you’re not careful, your body.