In spite of being the Einstein and Heisenberg of the modern jazz recording business, Blue Note label bosses Alfred Lion and Francis Wolff occasionally seemed to suffer from a black out. Why else did they release only one album – True Blue – out of four excellent sessions of tenor saxophonist Tina Brooks? 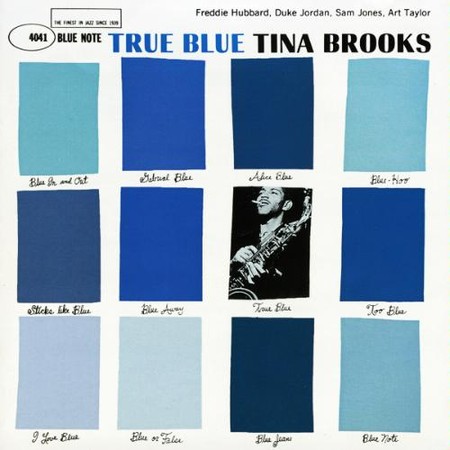 Side A:
Good Old Soul
Up Tight’s Creek
Theme For Doris
Side B:
True Blue
Miss Hazel
Nothing Ever Changes My Love For You


Fifty-five years after the fact, one can only speculate. Jack Chambers, in a May 2005 Coda issue, suggested that Alfred Lion and Francis Wolff effectively killed the career of Brooks. (Who Killed Tina Brooks? – read here) A lot of conjecture. I’m sure that The Lion & The Wolff couldn’t be bothered with the fact that Brooks, a reserved, shabby-dressed, corner bar jazz cat, didn’t look as good on a record cover than Hank Mobley. They used Brooks on only a handful of sessions, but Jimmy Smith’s The Sermon, Kenny Burrell’s Blue Lights Vol 1 & 2 and Freddie Hubbards’s Open Sesame were notable albums, not cautious try-outs destined to be shelved. Whatever the reasons, it definitely is a pity that a career as a leader for Blue Note didn’t work out for Brooks in his heyday of 1958-61.

Another mystery though: why didn’t Brooks, seeing that Blue Note apparently had other priorities, tried to find a place in the roster of related companies like Prestige?

If it weren’t for ace producer Michael Cuscuna, whose influential re-issue company Mosaic released The Complete Recordings Of The Tina Brooks Quintets in 1985, (which in turn led to seperate re-issues of his albums by Blue Note in the nineties) we wouldn’t have known that not only True Blue showed potential, but that other sessions displayed a mature instrumentalist with a sinewy yet edgy tone and ability to string together cliché-free line after line. Brooks was also a prolific writer.

And stood his ground amidst a bunch of top-notch figures of the day, like Art Blakey, Philly Joe Jones, Lee Morgan and Paul Chambers. 1958’s Minor Move, 1960’s Back To The Track and 1961’s The Waiting Game were mastered, numbered and designed but, ultimately, shelved.

It’s hard to pick a winner. I would say the quintessential Tina Brooks-statements were ignited by Philly Joe Jones’ blistering sparks on The Waiting Game.

True Blue was recorded a week after Freddie Hubbard’s Open Sesame, the debut album of the promising trumpeter, which depended significantly on the input of Tina Brooks as composer and sideman. Brooks had functioned as Hubbard’s mentor for some time.

Fitting the company’s hard bop aesthetic like a velvet glove, the album boasts such almost inexplicably charming, blues-based, minor key tunes as Good Old Soul (including a great off-centre solo by Brooks) and True Blue. (the tune is upbeat, catchy and the employment of tension without release is nifty) There’s the langourous, beautific melody of Miss Hazel, wherein Brooks and Hubbard are right on the money and Art Taylor puts in stunning rolls, and the moody but sprightly Theme For Doris.

Brooks may not have been a pioneer like Dexter Gordon or an innovator like Joe Henderson. But his all-round package of chops, authority, melodic panache and gift for writing should’ve led to more than just one album as a leader. Addicted to heroin and suffering from liver damage, Brooks passed away at the age of 42 in 1974.