I bet ya organist Hank Marr’s incredibly swinging album Sounds From The Marr-Ket Place will prompt even the worst couch potato to clap hands, stamp feet, shake hips, and well… shake everything else it’s got with it. It has not only a contagious, soulful vibe, but is also intriguing for the fact that it marks the recording debut for future avantgardists James ‘Blood’ Ulmer and George Adams. 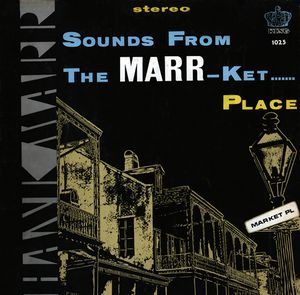 Side A:
The Marr-Ket Place
Soup Spoon
Smothered Soul
I Remember Acapulco
Greens-A-Go-Go
Side B:
Down In The Bottom
My Dream Just Passed
Home Fries
Come And Get It
Get On Down


Marr had always been ready and able to work up a storm, having released series of meaty r&b-type singles designed for the jukebox market in the late fifties and early sixties. Two of those singles for Syd Nathan’s King label, Greasy Spoon and Silver Spoon, were minor hits. King – and its subsidiary label Federal – included in its roster, among others, James Brown, Hank Ballard, Freddie King and fellow organist Bill Doggett.

A bunch of singles ended up on the compilations Teentime Latest Dance Steps (1963) and Greasy Spoon (1969). Marr’s 1964 live gig in his hometown of Columbus, Ohio, Live At Club 502 and Sounds Of The Marr-Ket Place were all-round albums. Marr’s recorded output of albums wasn’t voluminous. Clearly, the livelyhood of musicians like Marr depended very strongly on gigs in Eastern and Mid-Western clubs that tended to the growing audience of organ jazz in the wake of pioneer Jimmy Smith’s popularity. In the eighties, Marr concentrated on teaching and lecturing at Ohio State. Marr recorded three albums in the nineties on the Double Time label, among them Hank And Frank in 1996, with tenorist Frank Foster.

Marr has a blues-drenched style and ‘burns’ like the best of them. But he’s also a refined player with a crafty approach to the Hammond B3’s settings. His solo in The Marr-Ket Place rocks like crazy and is splendidly executed. The tune’s a fast swinger. It’s not the only exciting Marr bit. The album is varied, alternating between uptempo, catchy swingers, boogaloos, slow blues and rumba.

George Adams went on to become one of avantgarde’s most beloved tenor saxophonists from the seventies onwards, at the same time firmly rooted in the blues. He cooperated with Charles Mingus and Gil Evans, but is perhaps best known for his extended work with Don Pullen. His deadpan delivery of quirky blues bits in The Marr-Ket Place and big, smoky sound and honky style which brings to mind both Stanley Turrentine and Willis Jackson in slow blues Soup Spoon are cherries on the album’s top. Same goes for James ‘Blood’ Ulmer, whose 1983 album Odyssee is a vanguard classic. His playing on the album suggests the influence of the era’s soul guitarists and the twangy, biting work of Johnny Guitar Watson. Smothered Soul finds Ulmer also soloing in octaves.

Marr’s marketplace is one rocking joint.