The Freedom Book is one of Booker Ervin’s finest recordings. The grossly underappreciated tenor saxophonist displays all his strong points: a strongly individual, emotional style that communicates directly to the listener, long flowingly coherent lines and last but not least, that forceful, throat-grabbing, wailing sound. 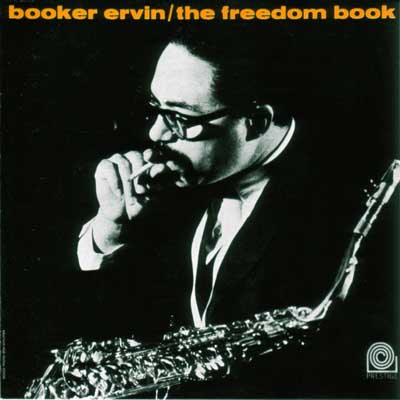 Side A:
A Lunar Tune
Cry Me Not
Grant’s Stand
Side B:
A Day To Mourn
Al’s In


Ervin is best known for his long association (1959-64) with Charles Mingus, appearing on landmark albums as Mingus Ah Um, Mingus Dynasty and Blues & Roots. He also made lasting contributions to albums by Don Patterson (Hip Cake Walk, The Exciting New Organ Of Don Patterson), Roy Haynes (Cracklin’) and Mal Waldron (The Quest), among others. From 1964 till 1966, and again in 1968, Ervin worked in Europe. He also performed in Nigeria in 1960 with friend and pianist Randy Weston. While Weston gained quite a lot of recognition with his ‘world musical’ jazz approach, Ervin never really got a foothold in Europe and returned to the US in 1968.

Geeky info: Downbeat Magazine ran a eulogy of Booker Ervin in their issue of October 15, 1970. Coincidentally, at the bottom of the page is a tiny news report on the fact that Randy Weston opened a jazz club in Tangiers, Morocco. By 1970, Booker Ervin had lived for nearly three years in Randy Weston’s apartment in NYC. Ervin died of kidney disease on August 31, 1970.

The “Book” series released by Prestige (Ervin was nicknamed “Book”) constitute some of Ervin’s best recorded output. The Freedom Book is the first album in a row that includes The Song Book, The Blues Book and The Space Book. The hi-voltage energy of The Freedom Book is particularly apparent in A Lunar Tune. The quirky blues melody puts you on the edge of your seat. Subsequently, the charged work of the fabulous rhythm section and furiously wailing, coherent phrases of Ervin are sure to leave you breathless, almost to the point of suffocating! It’s a stellar performance. Jaki Byard, a longtime member of the Mingus group as well, demonstrates his idiosyncratic, masterful blend of bop and tradition to full effect.

Two tunes suggest that Booker Ervin digested more than a dose of classic swing. He blows a tough ballad, Randy Weston’s Cry Me Not, displaying the assertiveness and big sound of Coleman Hawkins and Don Byas. At the same time, Ervin’s fluent lines reveal the influence of Dexter Gordon. Both Ervin and Gordon are seldom, if ever, short on ideas and their harmonic sense is keen. Grant’s Stand comes across as a swing tune for the new age, wherein Ervin sounds like a hybrid of Illinois Jacquet and John Coltrane. All the while, Booker Ervin’s indomitable wail reminds us who we are dealing with.

A Day To Mourn – that presumably deals about the emotions following the JFK assassination on November 22, 1963 – is a moody piece with a vivid middle section. Drummer Alan Dawson’s Al’s In veers from a slow Eastern-flavoured intro into a fast part that is an example of the energetic, responsive interplay of the group.

Arguably, Ervin never got the popular recognition that was his due because his hybrid style didn’t fit in the neat, small-minded categorizations both critics and audiences often firmly held unto in the sixties. Booker Ervin may not have been as advanced as Coltrane or Sonny Rollins, nor as influential as Dexter Gordon. But he surely belongs to the top rank of his tenor sax generation. Ample evidence abound. The Freedom Book is just one piece of it.