Pipe-smoking Eric Kloss was seventeen when he recorded Love And All That Jazz. It was the second album for the young alto and tenor saxophonist on Prestige. Quite exceptional for a young man to be appointed leader from the start, but Kloss was an exceptional talent. At age twelve Kloss sat in with the bebop giant and fellow saxophonist Sonny Stitt, renowned for blowing many asses of stage. Kloss, blind since birth, received plenty encouragement from the fearsome saxophonist. 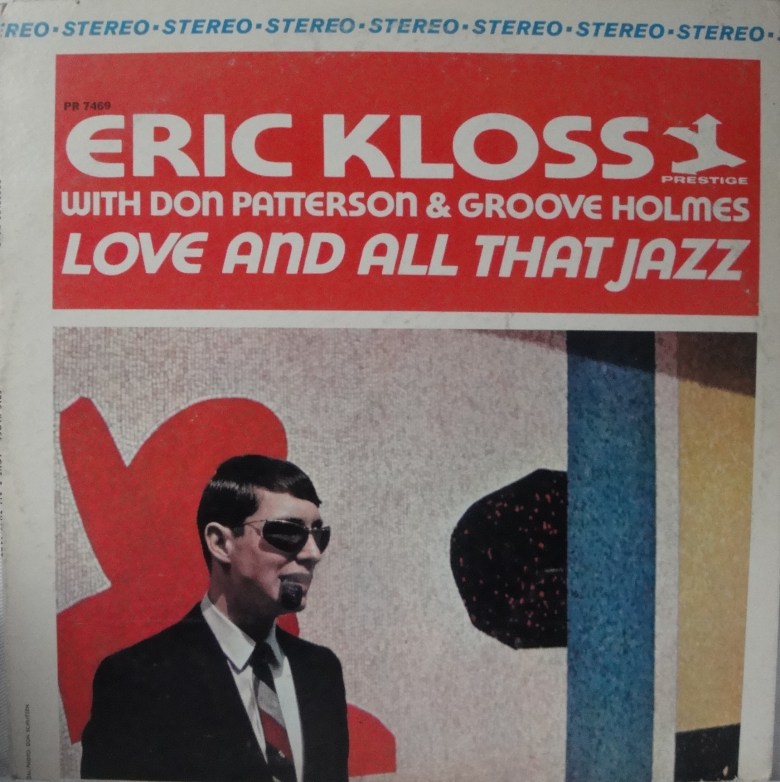 Side A:
You’d Be So Nice To Come Home To
Just For Fun-K
The Shadow Of Your Smile
No Blues
Side B:
Love For Sale
I’m Glad There Is You
Gemini


His playing is impressive both for its technical mastery and bravado. Indeed, sometimes the ideas stop flowing and Kloss finds himself in a neverland, squirting meaningless titbits to regain his posture. But it’s only logical, considering his age, that his conception was not as yet full-grown. It was developing rapidly and excitedly. There are moments of charming recklessness as Pensylvannia-born Kloss blasts his way through the standard You’d Be So Nice To Come Home To. Kloss meanders through scales and low and high registers with the sudden aplomb of Eric Dolphy. His tone and attack is reminiscent of Stitt. Kloss himself brings long, crunchy wails, fiery, suprising twists and off-the-cuff double-time gymnastics in between.

Kloss would go on to record a highly proficient string of records for Prestige and Muse in the sixties and early seventies, subsequently incorporating popular music as well as avantgarde features into his hardbop bag. Unfortunately, Kloss largely disappeared from the scene after 1981, due to a struggle with asthma.

Waltz blues Just For Fun-K, that consists of a droll theme and kinky extension, finds Kloss building tension comprehensively. His alto work on Cole Porter’s Love For Sale is more virtuoso than heartfelt. The manner in which Kloss strikes a balance between tenderness and hard-boiled bluff in ballad I’m Glad There Is You, however, proofs Kloss doesn’t merely engage in youthful show-offs.

The album is divided between two backing groups. Don Patterson’s trio proves to be better attuned to the hi-voltage style of Eric Kloss. Their cooperation on Kloss’ debut album, Introducing Eric Kloss, might’ve been the reason of their rapport. The pulsating drum rolls of Billy James spur Kloss on and Patterson’s comping behind Kloss is urgent and his solo’s are well above average. The Groove Holmes trio is not bad. Guitarist Gene Edwards plays an uplifting bit in Love For Sale. But the sound of the organ is harsher and creates a messy atmosphere. And the more conservative style of Groove Holmes on this album doesn’t match as well with Kloss than does Patterson’s.

That doesn’t stop Kloss from forcefully blowing his way through Jimmy Heath’s Gemini. But the session with Don Patterson is more coherent. A demanding and provocative session of the young Eric Kloss.