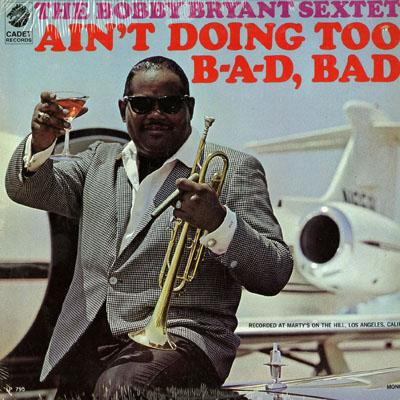 on February 1967 at Marty’s-On-The-Hill, Los Angeles

Side A:
Sunny
Love Is Supreme
Blues For Ramona
Side B:
A Change Is Gonna Come
58th Street
Girl Talk
Don’t Say Goodbye


Communicating the blues evocatively, Bryant stays true to the roots of his place of birth, Hattiesburg, Mississippi. Occasionally, however, Bryant puts his message in the corner by overzealously relying on gimmicks. Luckily, three factors keep Bryant in check. Firstly, his group lays down a tough groove. Secondly, the carefully crafted tenor charts unifies the varied repertoire. Finally, in contrast to many live recordings, solo’s are concise. It keeps fresh a date of this groovy nature.

After ‘calling the children home’ a capella, by means of upper register blowing, the perennial Sunny sets in. Its unusually slow drag is enticing. Neal Hefti’s much-covered Girl Talk gets the same treatment. Uptempo rocker and Bryant original 58th Street – a crowd pleaser par excellence – is perhaps the album’s most satisfying tune. It does without a Bryant solo, but his buoyant tackling of the theme and meaty way of ‘taking the tune out’ cracks everybody up. Pianist Joe Sample delivers an especially swift and funky solo.

Stix Hooper’s Blues For Ramona ignites ambivalent feelings. Herman Riley’s tenor solo is coherent and solid and the way Bryant backs Riley, and vice versa, is stimulating. Unfortunately, Bryant also creates havoc by soloing simultanuously with Riley near the end. It sounds disorientating and gets on your nerves.

By 1967 Bobby Bryant was an experienced trumpet and flugelhorn player that had worked with Oliver Nelson and Charles Mingus. He was a firm part of the West Coast scene and acquainted and/or recorded with, among others, The Jazz Crusaders (of which the earlier-mentioned Joe Sample and Stix Cooper were part), Gerald Wilson and the lesser-known trombonist Lou Blackburn. Blackburn also played on Bryant’s 1971 album Swahili Strut and provided the picture for this album’s cheerful front cover.

Taking that brisk image into account, it is evident that Bobby Bryant indeed wasn’t doing too bad. Much in demand as trumpeter for Hollywood’s movie business, this album makes clear Bryant also had a foothold as soulful cooker in clubs such as Marty’s-On-The-Hill. Shouts from the audience in the opening track, that gave this album its name, attest to that honourable fact.