An important part of the spirit of jazz, writer and critic Nat Hentoff once wrote, is the independent character of the jazz musician. Improvising involves taking risks while simultaneously holding on to one’s particular style and ideas. It, ideally, takes a seizable amount of stubbornness and discipline many laymen cannot help but find admirable. A classic example of such endurance is Thelonious Monk. It took the great pianist about fifteen years of struggle, poverty, misunderstanding and denunciation before Monk’s ‘brilliant corners’ were finally part of jazz’ main route. A lesser known example of stubborn dedication is pianist Barry Harris. 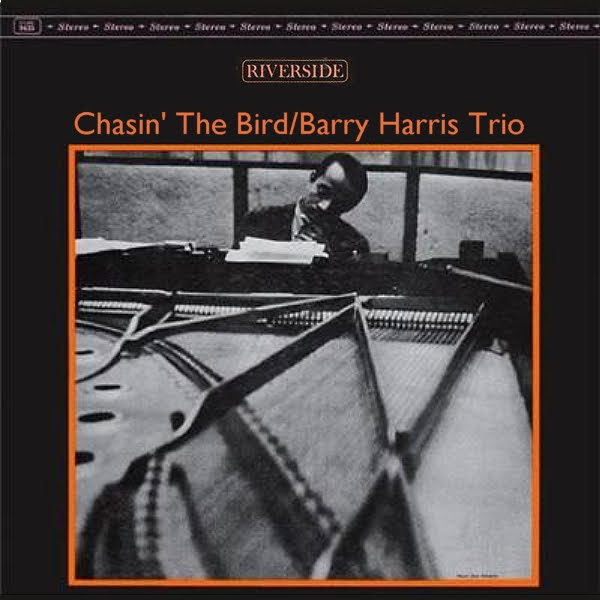 Side A:
Chasin’ The Bird
The Breeze And I
Around The Corner
Just As Though You Were Here
(Back Home Again In) Indiana
side B:
Stay Right With It
‘Round Midnight
Bish Bash Bosh
The Way You Look Tonight


Nowadays, the elderly Harris is an authority on the works of Monk and Bud Powell. In the seventies Harris lived alongside Monk at the residence of the legendary jazz mecenas, baroness “Pannonica” de Koenigswarter in New York and from the mid-fifties onwards fervently studied and interpreted Monk, Powell and Charlie Parker. It says a lot about his background. Believing bebop to be synonymous with jazz more than any other development, Harris made it his mission over the years to talk about its meaning and teach its theory to new generations in universities and music colleges around the world and in the Jazz Cultural Theatre Harris has founded in the eighties. It took some perseverance, and little financial rewards. But as friend and tenor saxophonist Jimmy Heath said a couple of years ago in The Guardian: “We started because we loved this music. Harris’ students pay very little because Barry is more concerned about spreading the music around than financial gain.”

Harmonically, Harris keeps in line with his examples Monk, Powell and Parker. His solo’s sound a lot like Powell, but are less frenzied and angered. Instead, Harris concentrated on a lithe yet occasional gutsy swing. An unusual bebop approach seldom found among second-generation colleagues. (Tommy Flanagan comes to mind) Chasin’ The Bird is Barry Harris’ sixth solo album and his fifth for Riverside. Furthermore, in 1962 Harris had built up an excellent resume as sideman with Cannonball Adderley, Donald Byrd, Johnny Griffin and Sonny Stitt. Nothwithstanding Harris’ faithful bebop tactics, there are touches in his style, notably his firm, bluesy left-hand accompanying of soloists, that he would use to effect thereafter in a number of hardbop sessions, chief among them Lee Morgan’s smash hit recording of The Sidewinder.

Chasin’ The Bird sports, among others, one Parker composition (Chasin’ The Bird), two standards famously injected with bebop logic by Parker (Indiana, The Way You Look Tonight), one classic Monk tune (‘Round Midnight) and a couple of bop originals by Harris himself.

On the title track Harris shows remarkable technique on the theme, creating elaborate voicings with both right and left hand running along swiftly. It sounds like Bach and it sounds like Bach-influenced Bud Powell. Harris’ solo has a great flow and is cleanly executed; he doesn’t play fast for fast’s-sake. Ballad Just As Though You Were Here is constructed of dizzying, cascading runs mixed with sweetly romantic statements. It’s followed up by Indiana. It goes at breakneck speed and Harris puts a lot of juice in a coherent solo.

Harris’ approach is controlled and is proof of a lot of thought. The Breeze And I, for instance, was constructed around a Latin rhythm without the common release into 4/4 time. It gives Harris the possibility to concentrate on and dig deeper into the percussive piano style he utilizes. Its percussive effect and relaxed but effective use of space reminds me of Duke Ellington’s combo work with Max Roach and Charles Mingus on the rare gem Money Jungle.

Harris uses a lot of Monkisms – rollicking scales and dissonance – on Monk’s ‘Round Midnight, but also creates mellow harmony. The Harris originals come off nicely. Bish Bash Bosh, particularly, is a contagious tune including a smart stop-time theme and repetitive, fiery sparks. The supporting group – bassist Bob Cranshaw and drummer Clifford Jarvis – really get into the groove here. They create a solid bottom as well as place sureshot accents throughout the album.

Bebop is not an easy music to perform meaningfully, let alone correctly. Barry Harris was well capable of handling bop’s legacy, and in the process embraced it with his own gentle and swinging flavour.