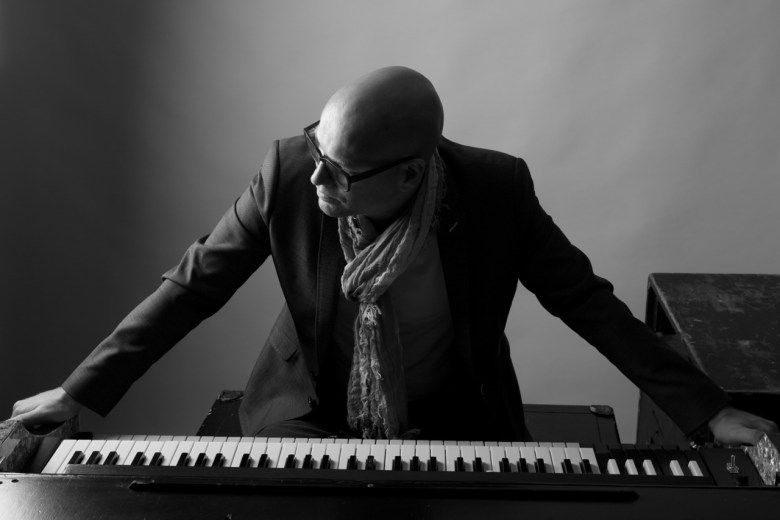 It takes some power of adjustment when coming upon that grittiest of instruments, the Hammond organ, in a clean-cut suburb such as Tilburg’s Reeshof quarter. But I guess I’ve been brainwashed for romantic ends by jazz club visits and countless smoky record covers. Because, naturally, the organ has come a long way from dinky burlesque theatres and a downgrade by the jazz police to an appraisal by keen, broadminded critics and folks alike and worldwide recognition as an instrument fine-tuned for modern jazz as well as rock, pop and soul.

The home studio of Arno Krijger, one of Europe’s vanguard organists, harbours two Hammond organs. Amidst various musician’s tools and a dusty, vintage Gretsch drumkit, the big case of a Hammond B3 organ looms large in the centre of the room. Adjacent to that is a Leslie speaker and against another wall resides a C3 organ, which Krijger has used to spice up the interview explaining to me the difference between the hard bop of Jimmy Smith cum suis and the type of avantgarde jazz Larry Young brought to the fore and which is a dominant influence on Krijger’s work. Both styles sound fine by me and the point has been made clear in, successively, bluesy and refined manner.

AK: For a big part, it’s a sentimental choice. It’s linked to my youth. I’m raised on McGriff, Rhoda Scott, Milt Buckner. This album was in my father’s collection and I put it on again and again. We had two organs at home, one electric, which I toyed with as a kid, and one with valves. I started playing on that one and then I thought, wait a minute, now I’ve got that raw McGriff sound!

FM: When the question is raised in a discussion between me and a jazz lovin’ pal or acquantaince which organist is nr. 1 as far as ‘screamin’ is concerned I always end up with McGriff. How did he get that sound?

AK: Well, you know, every organ has a different sound. I think McGriff’s possesses an inherent edge. Whether he plays soft or hard, there’s always a level of overdrive. But that’s not all. The room and acoustics play a part. My organ has a relatively clean sound, but sometimes I’m playing in a club where I have to be careful not to let my organ heave all over the place, so to speak. It also depends on the volume. Then there’s the setting of drawbars and such.

FM: All About My Girl kicked my ass.

AK: That organ’s spittin’ and puffin’! It’s pretty nifty, you know, considering the simplicity of the material, with just a few chords to play with. It has a good sound, good timing. Impeccable groove music, all tunes are cookin’. A number of things go wrong, though.

AK: Well, there’s When Johnny Comes Marching Home. After that march-bit, they change to swing time, but the drummer keeps on marching for a few bars.

FM: A bit silly. But we don’t mind a few minor mishaps, as long as it doesn’t get out of hand.

AK: That’s right. It’s a live album, of course. There are a couple more, nevertheless, I remember the one in Georgia On My Mind, particularly. The bridge is messed up, twice. Listen here, McGriff is struggling with the chord structure, it seems he’s trying to regain his posture. (After a pause) Listening to it right now, I’m thinking McGriff probably used the foot pedals. You see, usually those guys play bass with their left hand, but on ballads, that are slower and have longer notes, they sometimes use their feet. I think McGriff is not used to it, that might explain the unease.

I don’t play it too often these days. But when I do, it all comes back, I can dream McGriff’s version and I’m unable to inject much of my own style into it. So much expression, rough settings, beautiful vibrato!

AK: At conservatory pupils often go through a phase of wanting to play more daring things. It worked like that for me. So in comes Unity, wow!

AK: Well, it’s harmonically complex, it’s challenging. You know, it’s a coincidence really that Young is an organist, he probably would’ve played that modal stuff on any one given instrument. He’s less an organist than, say, Jimmy Smith.

FM: Young has a horn-like approach.

FM: Without the experiments of John Coltrane and McCoy Tyner Larry Young wouldn’t have become the Larry Young of Blue Note fame.

AK: Sure. And he incorporated the whole tone scale that Thelonious Monk favoured, you know. He’s a ‘modern’ organist. 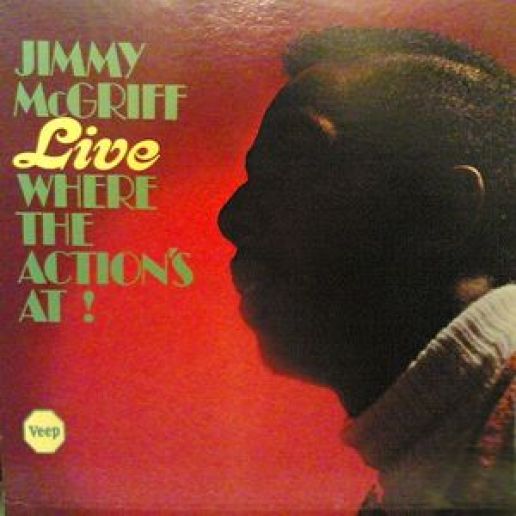 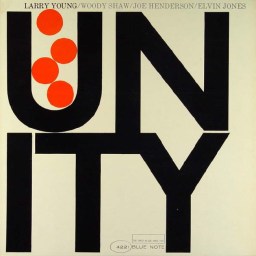 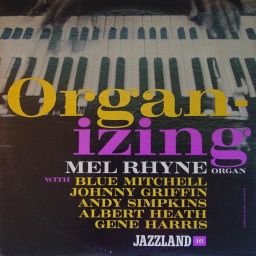 Incidentally, Krijger’s iTunes list spews out Monk’s Dream, one of three Woody Shaw compositions on Unity, which is a mesmerising duet between Young and drummer Elvin Jones.

AK: Listen here, near the end. There’s that string of fast toodle-do’s. That’s the use of whole tone scale. He also incorporates it into his solo’s, of course. What a duet, they complement each other beautifully. Elvin Jones typically pushes and pulls, it has that rumble and incomparable juggling with time and tempo. Larry Young is like that, too.

AK: Yeah. And Young’s sound is clean and quite similar throughout his career. I think his Leslie speaker is almost ‘off.’ Young’s not in a circus, doing tricks. He eschews the desire of putting your feet on the ceiling combining high C’s with that Leslie speaker, and stuff like that.

What I figure Krijger also puts across in so many words is that Larry Young was an organist particularly keen on interacting with his fellow musicians, instead of merely functioning as a leader in front of a backing band. Naturally, Young was uniquely gifted to do so and indeed a lot of his groups sound utterly ‘together’. A look at some of Young’s colleagues during his Blue Note period, and beyond, is evidence of his standing and affinity: Elvin Jones, Grant Green, Joe Henderson, Woody Shaw, Bobby Hutcherson, Lee Morgan, Tony Williams, Miles Davis.

AK: He’s been a big influence. There aren’t too many organists that took Young’s approach to heart. Larry Goldings –whom I admire greatly – and Sam Yahel are cases in point.

I like to do different things to avoid boredom and, hopefully, improve. Some stick with one thing and become very good at it. That’s ok, too. But it’s not my bag.

On the subject of organ jazz and Krijger’s place in the pantheon of the B3’s possibilities, the organist shows a relaxed yet serious demeanor. In his voice one can hear the drive of a seeker. Privately, Krijger is a good-natured, playful guy. Discussing his soul jazz past, a fair dose of that comic sensibility rubs off. A sensibility that, once a punchline comes in sight, is flavoured with a bit of hillbilly accent from the Zeeuws-Vlaanderen region he hails from. It could be that I’ve contaminated my interviewee. I’m from that southern part of The Netherlands as well.

AK: It took me a long time to shake off the desire to satisfy people with the usual organ jazz tricks. How it went was, I started with the intention to come up with something original, but then at the end of the gig succumbed and threw in some ‘burners’. Which, if it’s not your thing, is definitely not ok, of course.

Back then, whenever I was in a club with that organ, usually somebody in the crowd shouted: ‘O yeah, some Jimmy Smith tonite! Play them blues, boy!’ Which I would answer with, ‘yeah, well, we’re going to do something else.’ ‘Ah, come on, Jimmy’s the King!’ ‘Yeah, but…’ Haha!

Seated at the C3 organ, Krijger discusses another organist he likes, Melvin Rhyne, mostly known for his association with Wes Montgomery. Krijger is enamoured of Rhyne’s swinging, relaxed flow on albums such as Portrait Of Wes. Rhyne’s style is less adventurous as Larry Young’s, but distinctive for its continuous stream of valuable statements and just as devoid of unnecessary lacy embellishment. Krijger demonstrates Rhyne’s sound on the organ. It has to do with a minimum of pulled-out drawbars that create a sober sound and the plucky, ticky sound he gets from putting on the percussion button.

A brief but insightful object and history lesson. Arno Krijger is, to paraphrase a title of one of Larry Young’s other enduring albums, really ‘into something’.

At ease with a variety of styles, it is through his front-line organ jazz approach that Hammond-organist Arno Krijger (b. Terneuzen, 1972) is mostly known. High in demand, Krijger has worked and recorded with Jesse van Ruller, Billy Hart, Toine Thys, Stefan Lievestro, Rolf Delfos, Dick De Graaf, Joris Posthumus, Nueva Manteca and James Scholfield among others. He currently is a member of trombonist Nils Wogram’s Nostalgia Trio. A full-fledged organ buff from his childhood days, Krijger is nowadays not only appreciated for his Hammond keyboard skills but also for his exceptional foot pedal technique. Among his prime influences are Larry Young and Larry Goldings.

One thought on “Take Three with Arno Krijger”