Don Patterson operated within the classic organ combo format – a quartet consisting of organ, guitar, drums and saxophone. On Satisfaction the horn is left out. It’s not sorely missed. Patterson keeps things interesting in many areas: that of technical ability, harmonic coherence and, last but not least, that of the blues. 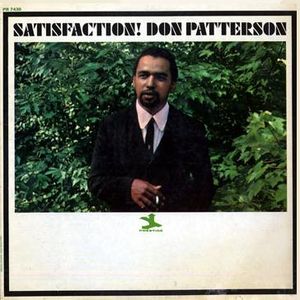 Side A:
Bowl Full Of Yok
Goin’ To Meeting
Side B:
John Brown’s Body
Satisfaction
Walkin’


Patterson had been working with drummer Billy James for four years, notably as backing group for Sonny Stitt. They don’t dwell on matters and head into two uptempo blues shuffles, Bowl Full Of Yok and Goin’ To Meeting, commenting on each other’s phrases ebulliently. Patterson is a great storyteller and capable of stretching out to the limit. Bowl Full Of Yok’s many choruses never have a dull moment. After the theme is stated guitarist Jerry Byrd immediately grabs attention in dissonant vein and launches into a solid solo. Byrd flavors his personal style with touches of Charlie Christian and Pat Martino. In this session Byrd takes some interesting solo’s; his guitar sound is a bit distorted, which enlivens the down home-type proceedings.

Jagger/Richard’s Satisfaction has gotten a lighthearted, funky treatment. On John Brown’s Body – a marching song about an abolitionist in the American Civil War – the resemblance of Patterson’s play to the famous character that influenced him to take up the organ in the first place, Jimmy Smith, is most striking.

At the time, liner note writers more often than not referred to the schism that existed between stuffed shirts who detested the organ genre (and its popularity!) and aficionados that defended it as a worthy addition to the art of jazz. Bob Porter, who wrote on the back of Satisfaction’s sleeve, is no exception. The battle may seem absurd nowadays, as generally people finally got hip to it; I’m on the side of, as one might have expected, Bob Porter & Co. Naturally, it would be hard to deny that there have been more than enough mediocre organ sessions between 1955 and 1975. But Patterson didn’t partake in any of them; and Satisfaction is but one example that the jazz of the Hammond B3 could simultanously be entertaining, smart, soulful and inventive.