For a session from 1967, Chocomotive sounds curiously anachronistic. Its sound is vaguely reminiscent of the era of Lionel Hampton. It has its rocking moments and therefore was probably as attractive for the r&b and popular music crowd as were his other recordings of the period. However, although Person recorded for years with organist Johnny “Hammond” Smith, arguably he was in the proces of searching for the funky form (and format) that would see him play on a number of excellent organ and soul jazz releases and a couple of high profile side dates in the late sixties and early seventies. 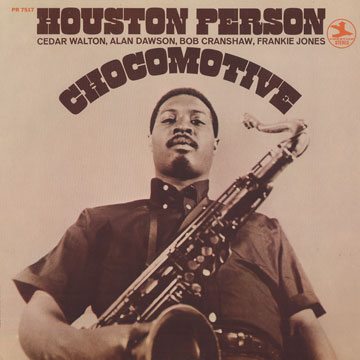 Side A:
Chocomotive
You’re Gonna Hear From Me
Close Quarters
Girl Talk
Side B:
Since I Fell For You
Up, Up And Away
More


Houston Person plays a tough, spirited tenor, but often sounds detached from his sidemen. Chocomotive is something of a mixed bag and these guys generally jump off the saddle as cowboys without kettle. There is some nice balladry, Chocomotive has a rollicking Louis Jordan-type jive beat, but doesn’t really go anywhere, and a eccentric take on psychedelic movie tune More (of Pink Floyd fame) promises more than it delivers.

Alan Dawson, first and foremost a drummer, acts as a admirable vibraharp player, but hearing him handling the sticks himself would perhaps have been better attuned to this project. Cedar Walton, a gifted pianist who already had dates with Art Blakey, Max Roach and Art Farmer on his resume, ‘arpeggioes’ his way through blues ballad Since I Fell For You. The Fifth Dimension’s Up, Up And Away is the album’s most exciting melody, supported by a supreme Latin beat. It’s clearly in everyone’s bag. Finally the album takes off.