This is the Jimmy Smith I like the most. Not yet hindered by various concepts initiated by Verve’s Creed Taylor, which thrusted Smith into stardom. Some of those (big band) jobs were top-notch or fantastic, such as the collaborations with Wes Montgomery and Root Down, some of them mediocre, notably those that took Jimmy into singing (grunting) territory. Like Smith’s ‘hazardous-to-your-health faux pas from 1968, Stay Loose. Prayer Meetin’s the real deal: Jimmy Smith in full blues and gospel flight. 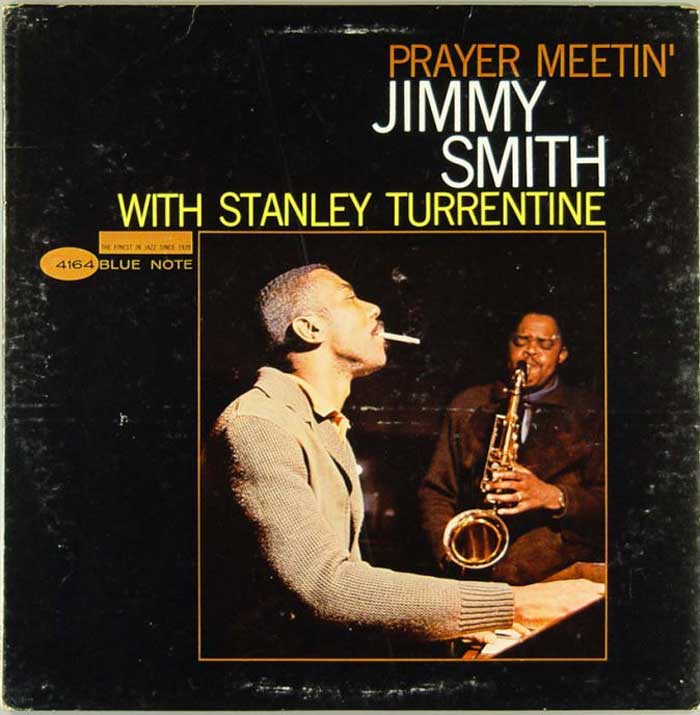 Side A
Side A:
Prayer Meetin’
I Almost Lost My Mind
Stone Cold Dead In The Market
Side B:
When The Saints Go Marching In
Red Top
Picknickin’


Fact is, Smith’s organ is a voice in itself; he don’t need no larynx. Jimmy Smith, applauded for what not, might best be described as a ‘talkin’ player. Here is a man who conveys uncluttered, basic emotions through B3 and Leslie speaker that sometimes eerily closely resemble the inflections of jazz vocals, albeit often in the tempo of a bop-oriented Speedy Gonzales.

The same thing, I might add, is true for tenor saxophonist Stanley Turrentine, who has a really moving solo in the ballad I Almost Lost My Mind; there is a lot of ‘breath’ in his playing – maybe best described as the whispering of sweet words in someone’s ear – which assuredly gets to you. Surely these qualities make Smith and Turrentine such a good match on Prayer Meetin’, and on other recordings such as Back At The Chicken Shack as well.

Incidentally, during one prolific week prior to the session that resulted in Prayer Meetin’, Smith recorded three more albums. This way Smith fulfilled his Blue Note contract before leaving to Verve. (of course, Jimmy did make a couple of great albums for Verve; collaborations with Wes Montgomery and Root Down are cases in point.)

Indeed, as a sermon Prayer Meetin’ is a redeeming exercise.