Ted Curson revealed himself as a breathtaking interpreter of rarely performed standards on his second album as a leader in 1963, Fire Down Below. 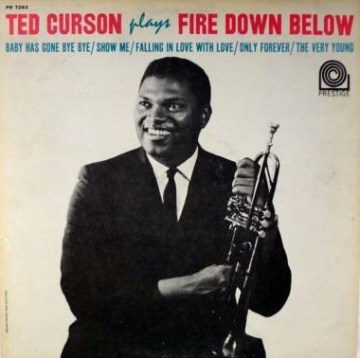 Side A:
Fire Down Below
The Very Young
Baby Has Gone Bye Bye
Side B:
Show Me
Falling In Love With Love
Only Forever


Interesting species, the type that switches smoothly from mainstream to avant surroundings. Perhaps because the type realizes that avant is a hollow shell without a link to the roots? Trumpeter Ted Curson felt comfortable in both spheres. Curson, who was born in Philadelphia in 1935, matured during the period when hard bop was developed from bop, blues and gospel. In 1955, Miles Davis stimulated Curson to move to New York City. Curson, a thoroughly schooled modern jazz player, played with avant-gardist Cecil Taylor around the turn of the decade, appearing on Taylor’s 1959 album Love For Sale.

In 1960, Curson joined the group of Charles Mingus. He appeared on four Mingus albums: Mingus, Mingus Revisited, Mingus At Antibes and Charles Mingus Presents Charles Mingus. A lot of Mingus. Well, Mingus could never be accused of austerity. The experience of Curson of playing with Mingus and sharing the frontline with Eric Dolphy left an indelible impression. After the passing of Dolphy – the reed and woodwind giant died of a diabetic seizure in Berlin on June 29, 1964 – Curson wrote Tears For Dolphy, a beautiful melody and Curson’s masterwork. A big part of Curson’s career was spent in Europe to much acclaim. He passed away in 2012.

The title of Curson’s Atlantic album from 1963, The New Thing & The Blue Thing, speaks volumes about his jazz personality. Preceding it, Curson debuted with Plenty Of Horn on the Old Town label in 1958. The follow-up, Fire Down Below, is the LP that begs to be added to the ever-growing mainstream jazz collector’s record cabinet. Curson is assisted by pianist Gildo Mahones, bassist George Tucker, drummer Roy Haynes and percussionist Montego Joe. It is testimony to the enormous wealth of standards that Curson could pick a whole set of rarely performed songs, excluding the well-known Hart/Rodgers composition Falling In Love With Love. Of the lesser-known tunes, Fire Down Below, The Very Young and My Baby Has Gone Bye Bye are gems of the first order.

The Carribean rhythm of Lee/Washington’s Fire Down Below is sustained throughout, eschewing a 4/4 release, which is hypnotizing, you feel the splendid exotic groove in your body, soul, toes. And your ass will be wiggling before you know it! Haynes draws on his Afro-Bop legacy from the late 40s, Gildo Mahones chimes in with a lively, percussive story that pretty much comes natural, considering his upbringing by parents of Puerto-Rican descent. Montego Joe had roots in Jamaica. Curson sounds pretty Carribean too.

Little/Sacker’s The Very Young is a beautiful blues ballad. Curson plays it like a song, holding notes like he’s telling it like it is, the feeling is overwhelming and his tart sound elevates it to a bittersweet symphony. Perfect pitch, the duality of bended notes that refer to both the moan of the country blues performer and the yowl of the country singer, plus the striking clear lines Curson sustains, complete the architecture of this brilliant performance. Clearness of line and orderly placing of phrases also mark the mid-tempo Allen/Roberts tune Baby Has Gone Bye Bye. Trumpet as good as it gets, like someone breathing, without effort, no strain. Curson’s heart is big and soft and beckoning for everyone to come and dance, rejoice, and praying for his people to overcome, overcome. Cherish the album that runs a mere 31 minutes with three such performances. Length of time is not the essence!