The first thing that comes to mind listening to 03 Jazz Trio’s Opening is that it must be the work of a tight-knit outfit that has been playing together nightly for months. 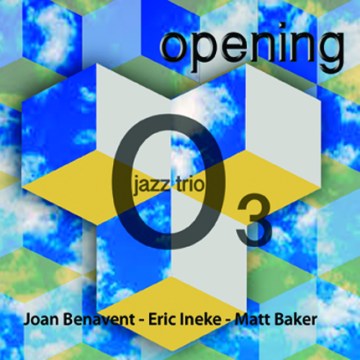 
That’s not the case. Although the protagonists have been crossing each other’s paths. The Spanish tenor saxophonist Joan Benavent and American bassist Matt Baker both live in Valencia. Dutch master drummer Eric Ineke, also an enthusiastic teacher at music schools and conservatories all around Europe, met Benavent at the Conservatory of The Hague. Subsequently, Benavent invited over Ineke to Valencia’s Seda Jazz school. There, Benavent coupled the drummer with the versatile Matt Baker to form a recording unit for Benavent’s ideas to come to fruition. The men participated in an avant-leaning session (and live performance) that turned out remarkably well.

By his own account inspired by John Coltrane, Ornette Coleman, hard bop and classical music, there is nothing that suggests Benavent is overreaching. An immaculate and extravert stylist – Benavent searches the extremes of his horn but is neither wild nor aggressive – the big and clear-sounding saxophonist tackles such diverse compositions as Debussy’s Danses De Delphes, Weill/Nash’ Speak Low and Benavent’s post-boppish Opening. This particular ‘opening’ of the program, definitely marked by the ‘Impulse label’ vibe, is something else. The grand, bowed bass opening, loose drum polyrhythm and Benavent’s lyrical yet charged theme immediately works on the emotions, pulling you in the promising universe of the album. Bang! It further develops through the solo of Benavent, whose ‘singing’ tone effectively ices his cake of sheets of sound and staccato playing, via fluent switches of tempo by the trio, subtle interaction of snare drum with sax and bass and a melodic drum intermezzo to the humorous, concise coda in march rhythm. Held together by Benavent’s thematic variation throughout. A royal cake indeed.

Sira i Xesca is a playful and hefty dip into mambo land. Añoranza, a composition by E. Granados, presents a happy marriage between high drama and the smoky tenor atmosphere so typical for classic jazz. The fact that the album’s two mainstream jazz tunes – thoroughly swinging sextet treatments of Speak Low and Mulgrew Miller’s Grews Tune – are snowed under a bit by the album’s front-running setting, speaks volumes about the trio’s skills and passion.

Surely we will see a growth on (relatively) young Benavent’s part in the department of storytelling, perhaps the least imposing aspect of the album, a carefully prepared session that undoubtedly revolves around the controlled fury of Benavent and the trio’s alert interaction. Ineke, elder statesman of hard bop who nonetheless has done his part of ‘far out’ playing during his long career, feels like a fish in the water. Matt Baker, a jack-of-all-hi-level-trades working in the fields of jazz, world, folk and classical music, contributes a forceful tone, melodic, versatile phrasing and exceptional use of the bow.

The tart, touching first part of Debussy’s Danseuses De Delphes is followed up by a meaty drums/tenor battle, the song ending with a blast not unlike one of those surprising thunderous twists in a Mingus performance. The curious but effective mix of vamp and modality of Coffe At The Almost Dead People Place is enticing. Moreover, it’s gutsy and fresh. The whole sum of Opening is just that, made all the more exciting by the sonorous and punchy sound production.