South and North-West meet on Sunrise, the latest release from Joan Benavent, killer saxophonist from Spain. 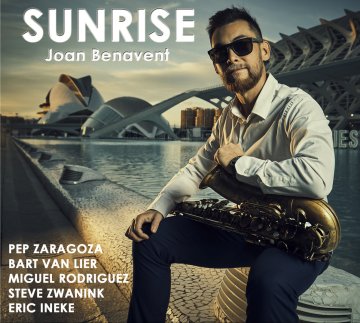 
Sunrise. Yes, the sun also rises. In Valencia, sensuous city on the East Coast of Spain, residence of tenor saxophonist Joan Benavent. The sun looms behind Ciudad de las Artes y las Ciencias, Valencia’s major modern sight. Ten-minute drive to the hospital in lockdown streets, but suddenly the stormy horn calls on the muse. A trumpet sizzles, a trombone giggles. They slide into a layered groove: propellent bass, snare rolls and subtle accents on the cymbal that tickle a frivolous toddler. Least until sunset, the silenced city is alive.

Sunrise follows up Opening, which featured Eric Ineke, one of his mentors in Valencia and The Hague. Opening (under the banner of O3 Jazz Trio) signified a couple of journeys to the outskirts of mainstream jazz. Sunrise picks up on that vibe: the chord-heavy title track, the oblique progression of El Ogro Grogro, the sweeping Coltrane-ish intro, duality of tension and release and the hip and heavy climax of the Latin-tinged El Bancal de la Serp, which may serve as a contemporary European update of the kick-ass Woody Shaw bands of the ‘70s.

Standard time. Body And Soul may not leave an unforgettable impression but Benavent’s less-is-more approach is a welcome diversion and Miguel Rodriguez adds a peppery and wide-ranging tale. Benavent sweetly and dynamically whispers Skylark and the band swings What Is This Thing Called Love to the ground. It pimps Mean To Me, immortalized by Billie Holiday, which is marked by spicy simultaneous blowing by Benavent and Van Lier and the steam train energy of Zwanink and Ineke.

How lovely to have the opportunity to hear trombonist Bart van Lier in a small band setting on record again. Rare occasion. The ephemeral colors of the European trombonist par excellence, head slide trombonist in the Metropole Orchestra and studio pro since ages, mingle neatly with brownstone Benavent and sunny Zaragoza. Tart, swirling exclamations mark his elegant and frivolous journeys through ballad, standard and post-bop. He can do anything on the horn and makes it sing. Master at work.

Master stroke to have this man join an already fine session of European mainstream jazz.

Curious, I asked Joan for a translation of some of the titles of his original compositions. Titles reveal something about the feeling and vibe musicians want to convey.

Benavent explains: “El Bancal de la Serp means snake’s field. It’s about a field on the outskirts of my village and the myth of an immense snake that could be found thereabout. Obviously we never got to see it, but as kids we glanced every once in a while and our minds made up the rest to the point that sometimes we would really see a bit of the snake, haha. In the end, for me and my friends this was a matter of overcoming our fears. Now I keep feeding the myth by telling the snake’s story to my daughter and nieces and it is so nice to see how they do well, fighting against their fears, because every time we have a countryside walk around that area, they are so curious to approach and see if they can find the big snake. For me it is important to see them overcoming their fears and that’s why I thought to write a tune about it.”

“El Ogro Grogro was a bedtime story that my aunt used to tell me when I was very young. The story talks about a princess that marriages an ogre against the will of her family. He ends up being accepted by everybody by saving some locals performing some brave acts. This story was a beginning for me to understand that the important part of a person lies inside and that you can’t judge a book by looking at the cover.”

Timeless stories and Benavent and his group did well to convey the sentiment.