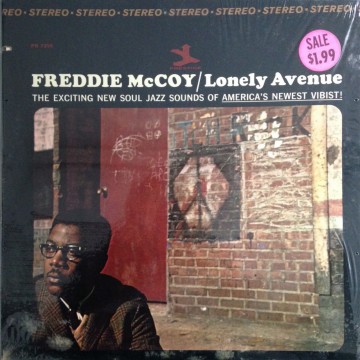 Side A:
Lonely Avenue
Roëll
Collard Greens
When Sunny Gets Blue
Side B:
Harlem Nocturne
Willow Weep For Me
Belly Full Of Greens
Feeling Good


Freddie McCoy, born in New York City in 1932, assembled a big crew to create the soulful canvas of his debut album on Prestige in 1965, Lonely Avenue. The coupling of vibes with trumpet, baritone sax, trombone, organ and guitar proved to be a remarkably flexible unit, both mean/funky and contemplative, which also, perhaps not entirely coincidentally, is a description of Freddie McCoy’s musical personality. The vibraphonist generates a lot heat but at the same time his playing is marked by a relaxed flow. Easygoing fellow but he’s not going to let you eat his lunch. One of few vibraphone players that focused on groove and grease. Yes, there’s a blues-drenched bit of Milt Jackson, without the dazzling technique of the God Of Vibes. And yes, there’s a bit of entertainment value that was inherent to the personality of pioneer Lionel Hampton, but the circus has left town before the roar of the lion. Freddie McCoy was more concerned with the kind of soul time that worked as a magnet for workers from all over the hood. Punch the clock, hurry home, slip into some shiny slacks and let’s hear it for the real mccoy’… Once settled in some upper Harlem joint, they shake their hips, shake their asses, shake their heads in amazement at the sight of this slick dude sweating it out behind that weird steel frame. Mallet boogie.

Plenty of warhorse and pop song for that kind of customer: When Sunny Gets Blue, Willow Weep For Me, Harlem Nocturne, Feeling Good. McCoy’s Roëll is a lovely ballad, his take on the Doc Pomus tune Lonely Avenue, best-known through the classic r&b version of Ray Charles, is super-soulful and the album’s crackerjack cookers, Collard Greens and Belly Full Of Greens, would serve well as background tracks for the volatile Ike & Tina Turner. Want some mean greens? Yes please, why not? Beats crème bruleé.

Freddie McCoy began to play the vibraphone in the Army in 1958 and subsequently played with Kenny Burrell, Johnny “Hammond” Smith, Philly Joe Jones and Doug Watkins. Following his debut, McCoy enjoyed a good stretch on Prestige, which released six albums between 1966 and 1968, focusing more and more on r&b and funk-ish ditties. Before he went off the radar, his last album Gimme Some was released by Cobblestone in 1971. Freddie McCoy was also a flight instructor who owned his own plane. No doubt he made some soulful maneuvers in that little booger.

Freddie McCoy passed away in 2009.