The pieces of the puzzle fell into place for trumpeter Dizzy Reece on his third Blue Note album Soundin’ Off from 1960. 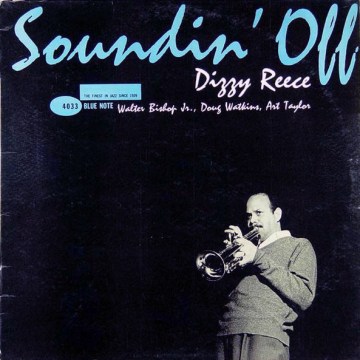 Side A:
Ghost Of A Chance
Once In A While
Eb Pob
Side B:
Yesterdays
Our Love Is Here To Stay
Blue Streak


Mr. Reece is still active these days at the ripe old age of 88. What’s more, performances of Dizzy Reece’s music, Routes In Jazz, have been held last January under the leadership of Trevor Watkins in the United Kingdom to much acclaim. 2019, Cool Britannia caught in the stereotypical web of contemporary polarization, a world away from 1948, when the young Kingston, Jamaica-born Reece set foot first in liberated Paris then the rebuilding war victor, the U.K., where fish and chips was everyone’s requested Last Meal and Stoke-On-Trent a place that played hide and seek with Sheffield under clouds of factory smoke. The talented Reece somehow caught the attention of Blue Note and recorded his debut as a leader, Blues In Trinity, with Donald Byrd, Art Taylor and a British crew including powerhouse tenorist Tubby “Tubbs” Hayes.

Reece moved to New York City in 1959 and, winning fans like Miles Davis and Sonny Rollins, soon found himself in the studio of Rudy van Gelder at Englewood Cliffs, New Jersey. Initially, Reece recorded with a quintet including Hank Mobley, a session that spawned Star Bright. Then Blakey was behind the kit, Stanley Turrentine on tenor saxophone, Bobby Timmons on piano and Jimmy Merritt on bass. The result: Comin’ On, recorded in 1960 but not released until 1999. Great album. Great line-up. In fact – in case you haven’t figured it out yet – Reece and Turrentine fronted a bonafide Jazz Messengers rhythm section. The explosive Blakey regularly pushes the guys to the brink, Reece holding his own pretty darn well.

However, I have warmer feelings for Soundin’ Off. The relaxed but probing rhythmic flow of drummer Art Taylor, bassist Doug Watkins and pianist Walter Bishop Jr. and the fact that Reece is the sole horn gives the trumpeter ample opportunity to let his true voice ring. A voice gay here, mournful there, tender, witty, sexy. Sexy enough to seduce audiences in the Big Apple, yet because of lack of opportunities Reece re-settled in jazz-minded Europe eventually. In a 2004 Jazz Times interview Reece said that he also got negative feedback on his integrated marriage.

Reece favors expressive statements over speed trials, wrapping his loving arms around ballads like Ghost Of A Chance, ridin’ on the blue notes of Once In A While with sleazy slurs, swinging smoothly on medium-tempo tunes like the Monk-ish Reece original Eb Pob – Ecaroh, Airegin, Eb Pob… Those modern jazz guys knew their way with wordplay. The nimble and occasionally locked-hands-lines of Bishop Jr. and the jubilant Reece make Yesterdays absolutely irresistible.

Sweet but with a lot of spunk. The way we like our hard bop artists from the Blue Note roster.

The album is part of a compilation package on Spotify, starts with track 13, up to 18. Listen below.

In the late sixties Hank Mobley’s round tone had become a bit rougher around the edges and his style was more hard-driving. This is evident on 1969’s The Flip, which boasts hi-voltage blowing but is short on finesse. Mobley, always the prolific songwriter, wrote all five tunes on The Flip. The compositions that turn out best are the ones that resemble Mobley’s songwriting of the late fifties and early sixties. 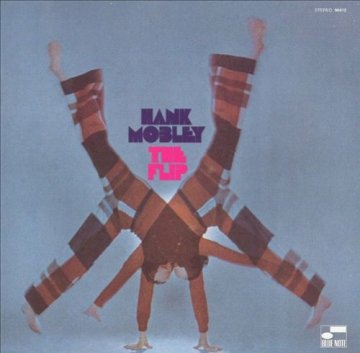 
Examples of the latter are Feelin’ Folksy, 18th Hole and Early Morning Stroll. Feelin’ Folksy swings suavely and is a coherent group effort. Mobley’s solo is a mix between his earlier bluesy style and new, more advanced bag. Clearly, Mobley is in fine form, in spite of the increasing alcohol abuse of that time in his life. Late 2014, I talked to Dutch pianist Rob Agerbeek, who toured in Europe with Mobley in 1968/69 and remembered that Mobley was playing very well indeed. Incidentally, Mobley wanted Agerbeek to play on the sessions of The Flip in Paris, but Blue Note boss Francis Wolff had already booked Vince Benedetti, so Agerbeek had to be cancelled.

18th Hole is an intricate, hard-swinging tune with great three-horn harmony. Philly Joe Jones keeps the guys on their toes, especially in Early Morning Stroll, a bop figure that makes good use of tension and release with an lengthy bridge.

Hank Mobley’s the quintessential musician’s musician. That isn’t front page news. Key words: killer chops, smart songwriting, unique round, warm tone, inventive storytelling, smokin’ hot to boot. Great storytelling, however, has become a minority on The Flip. More often than not, Mobley reaches an early climax in his solo’s, which doesn’t leave much room for a story to develop. Where to go when the gunpowder has faded?

To my pleasure, on Early Morning Stroll, Mobley cuts short his initial flurry of over-excited notes and instead tells an interesting, swinging tale. Trademark Mobley.

Snappin’ Out is a typical Latin hard bop tune and an easy head to blow on. Slide Hampton blows swift and assured. The tune is more satisfying than the title track and opener of the album, The Flip, which, arguably, is a conscious effort to reach the same popular status as Mobley’s earlier winner of 1965, The Turnaround. But conscious efforts, like femme fatales, rarely give you what you want.

The Flip swings hard and is sure to enliven a party. But unfortunately, it also swings wild and uncontrolled, favouring a strained, hi-octane tension over a sophisticated build-up. If Philly Joe Jones would be alive today to comment on The Flip, I’m sure he would agree that boogaloo wasn’t his long suit. I’m sure he would laugh and say, ‘Man, I better stick to modern jazz drumming, leave that boogaloo to Idris Muhammad!’ Jones possessed the humor and self-mockery. The drum legend faultlessly imitated Bela “Dracula” Lugosi on a 1958 Riverside album, remember.

Speaking of faultless jobs, considering Mobley’s abilities The Flip is quite a distance away from douze points.