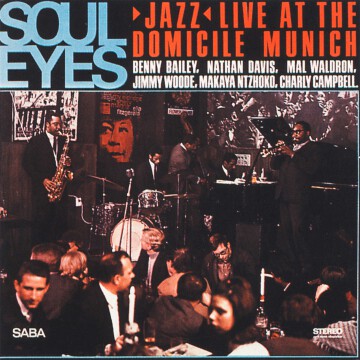 Side A:
Prompt
Soul Eyes
Side B:
Ruts, Grooves, Graves And Dimensions
Mid-Evil Dance


Late 90’s, the funky and avant-leaning Zaal 100 in Amsterdam’s Spaarndammerbuurt. This very cool and happy black old-timer was playing the trumpet. Lovely jam and bright, punchy trumpet playing. Little did I know, a young student who was into blues, sixties, alt-pop and about five years into discovering the giants of jazz and Hammond groovers, that this Benny Bailey, born Earnest Harold Bailey in Cleveland, Ohio in 1925, was one of the jazz realm’s many unsung heroes. He lived just around the corner.

About a year later, in 1999, I saw pianist Mal Waldron perform at the original Bimhuis. The band also consisted of soprano saxophonist Steve Lacy, trombonist Roswell Rudd and bassist Reggie Workman. I have forgotten who held the drum chair. Waldron had traveled northbound from his hometown of Brussels, Belgium. He seemed an intriguing cat that I knew from his feature on the Five Spot records of Eric Dolphy and collaborations with John Coltrane. (One of numerous pop tunes that I co-wrote in those days with my buddy from The Jeffersons sparked the line “put the B-side on / Coltrane & Waldron count from five till dawn” – sheer genius that prompted the sum total of sixteen vestal virgins that visited our show in Porgy & Bess to henceforth pronounce Mal’s surname as ‘Waldrawn’)

At the Bimhuis, Waldron was in his late career ‘minimal’ phase, playing very softly and sparingly. I loved it. Contrary to an obviously inebriated guy in the audience, who shouted from the balcony into that typically deep and concrete pit, “Wake up, Mal!”. Which rather pissed me off. Quite ‘pissed’ as well, I poured a beer down his neck.

Turned into a rather nasty situation.

These cats were long-standing expatriates. As I would come to learn, Europe had been crowded with Americans particularly since the ‘50s. Ben Webster, Kenny Clarke, Bud Powell, Don Byas, Dexter Gordon, Chet Baker, Rhoda Scott, Johnny Griffin, Steve Lacy, Horace Parlan, Idrees Sulieman, Sahib Shihab, Betty Carter, Art Farmer, among others. Nice big band that would make. Everybody agrees that Europe is where the gigs and serious appreciation were, and less virulent and pervasive racism. However, some eventually returned homesick, while some were not able to shake off a certain feeling of alienation, such as Johnny Griffin, who says in drummer Art Taylor’s book of interviews Notes And Tones:

“It’s all a mess. I’m here in Europe because it’s a little lighter on me than it is in America. But it’s the same thing. You don’t have forty million black have-nots over here like you have in America. But you have them here, because I see them sweeping the streets of Paris and Holland. It’s the black man’s ass up in the air. He’s stooping down picking up the dirt everywhere. The main thing is I’m here because I did something wrong on my planet. I’m not really from this planet. I did something wrong on my planet and they sent me here to pay my dues. I figure pretty soon my dues should be paid, and they’re going to call me back home so I can rest in peace.”

It wasn’t all fun and games, that’s for sure.

How would Benny Bailey and Mal Waldron and Nathan Davis (expat) have felt on the evening of January 11, 1968 at The Domicile in Münich, Germany? Pretty good, considering the generous rounds of applause and hurrays on the live album Soul Eyes: Live At The Domicile, released on the collectable SABA label that same year, a couple of months before Martin Luther King was assassinated and students revolted in Paris. These Scarlati’s, Grieg’s and Dowland’s of America’s original art form were honored, as the announcer brings to the fore, to present the first-ever concert at The Domicile, assisted by bassist Jimmy Woode (expat), conga drummer Charly Campbell and drummer Makaya Ntshoko. Refugee from the Land of the Rising Sun?

Nothing wrong with this gig. Prompt is a hard Art Blakey & The Jazz Messengers-type cooker. Waldron’s Soul Eyes (a standard ever since John Coltrane’s version in 1962) is hardly unforgettable but properly Latinized. Ruts, Grooves, Graves And Dimensions and Mid-Evil Dance (contestants for greatest jazz tune titles of 1968) fall in the category “Coltrane drone” or Mingus/Dolphy coop, hefty and energetic grooves. The crystal clear and buoyant trumpet of Bailey is smoothly embedded in the differing textures, Davis is lightly turbulent on tenor and his flute playing commands attention. High-quality suspenseful cats.

Waldron underlines their parts teasingly and firmly and his ratatouille of dense chords and tumbling licks and lines hints at his near-future excursions into free jazz territory: mid-career maximalism. His repetitive blasts on the lower keys of Ruts, Grooves, Graves And Dimensions are especially hallucinating. Best to enjoy the boisterous Waldron in small doses? Perhaps. Powerful vaccine, minor side effects.

Luminous aside: engineer Max Bolleman reflects on the playing of Mal Waldron in his memoirs I’m The Beat. Waldron was sound checking in Bolleman’s Studio 44 in 1990, participating in Barney Wilen’s French Story album. Bolleman said that the Steinway, which usually sounded crystal clear, suddenly sounded like a honky-tonk piano, as if the snares had broken. Bolleman says: “I stood for a while beside Mal, scratching my head. But when Mal lay down some chords, I immediately realized what the issue was. Mal Waldron’s touch is pretty rough, almost rigid, which explained the sound of the piano. A pianist can make or break the sound of the piano, which I had learned from ten years of recording experience. I had to deal with Mal’s touch.”

Nothing honky-tonky here. Instead, a lively live performance of top-rate Americans-in-Europe.

Benny Bailey passed away in Amsterdam, The Netherlands in 2005, Nathan Davis in 2018 in Palm Beach, Florida and Mal Waldron in 2002 in Brussels, Belgium.