Funk – with a capital F – is the heartbeat of Bobby Forrester’s obscure debut record from the early seventies, Organist. 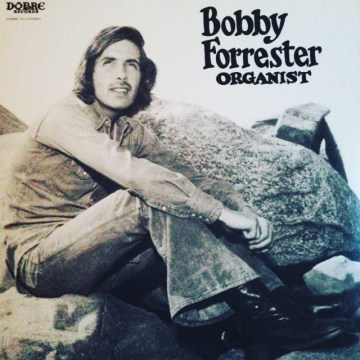 in 1971 at Gold Star Studio in Los Angeles

Side A:
Something
Sandford And Son Theme
Blues For Razz
Funky Fly
Side B:
The Next Time You See Me
Don’t Misunderstand
Uncle Funky
On Broadway


PPrestige and Blue Note were the big suppliers of organ jazz. Other independents like Impulse, Atlantic, Sue, Solid State, Groove Merchant all had their star organists at one time or other, with organists freely switching between them. Verve signed Jimmy Smith in 1963, a million-seller crossover to the white market. Then there were the obscure one-offs, labels that released only a few organ titles. Dobre is such a company, which released a hodgepodge of jazz in the seventies including titles by George Russell, Bobby Hackett and Mundell Lowe. And, weird but true, one organ record: Bobby Forrester’s Organist. How lovely when life is weird but true. How great it would be if life would strictly be weird but true.

Forrester played with Stanley Turrentine, Harold Ousley, George Coleman and was a longtime accompanist of r&b singer Ruth Brown. The organist was a mainstay at East Coast clubs as Minton’s, Baby Grand, Club Baron and recorded Organist on the West Coast, in Los Angeles in 1971. He’s got Elijah Williams Jr. on guitar and Johnny Kirkwood on drums. They conjure up a meaty, hot background to Forrester’s organ groove. A good, snappy band that knows how to lock in with the B3 beast – hi-hat and upright bass in sync with the B3 bass – is a prerequisite for meaningful organ jazz. Williams and Kirkwood kick ass.

Forrester’s slow and stilted take on George Harrison’s Something may not be a promising start but he subsequently makes good with soulful balladry (Don’t Misunderstand from the Shaft movie), soul and blues (On Broadway, Blues For Razz, The Next Time You See Me) and a couple of lascivious funk jazz bombs (Funky Fly, Uncle Funky, Sandford And Son Theme) that make organ, guitar and drums the equivalent of machinist, locomotive and engine, steamrolling a hot Amtrak train over the tracks of America’s tears.

Uncle Funky (by Harold Ousley) has the X-factor. But Forrester’s take on Quincy Jones’s Sandford And Son Theme is the definite highlight. Spurred on by the big beat and well-placed punches of Kirkwood, Forrester’s plethora of blues and funk patterns is reminiscent of the likes of John Patton, Groove Holmes, Jimmy McGriff, steadily working towards a climax in the Gold Star Studio in the City of Angels, California.

As Ruth Brown, self-proclaimed discoverer of Forrester, put it in her liner notes of Organist:

“Perhaps the ‘brother’ I overheard leaving the club the other night should be writing this because he said it all when he said, ‘Man that little white dude sure can play his ass off’.”