Another one from the vault of Blue Note, hurray! The buoyant, invincible swing of Art Blakey & The Jazz Messengers infuses Just Coolin’, a 1959 session with the classic frontline of Lee Morgan and Hank Mobley. 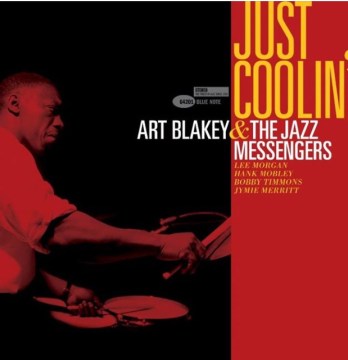 What else then would’ve been Lion’s considerations? After the unexpected hit record of Moanin’ in early 1959 Lion shelved the drum-oriented Drums Around The World session of November 2, 1958 – released in 1999 – and instead released the equally percussion-heavy session of November 9 as Holiday For Skins Vol. 1 & 2 in June 1959. Skins, furthermore, consisted not of Blakey’s successful working band but featured Donald Byrd, Ray Bryant, Art Taylor, Philly Joe Jones and Ray Barretto, among others. Presumably, the “drum” sessions were specifically stimulated by Blakey. Presumably, Lion was looking for a follow-up to the popular Moanin’ album. He put the Messengers in the studio in March not long after they had returned from a tour in Europe.

But instead of releasing that session, Lion chose to go for a live recording of April at Birdland, released as At The Jazz Corner Of The World Vol. 1 & 2. Not a bad idea, Blakey’s preceding live records, Live At Birdland and At Club Bohemia, had been good sellers, capturing The Jazz Messengers at their spontaneous best. Perhaps Lion was challenged as well by French RCA, which released Au Club St. Germain Vol 1, 2 & 3 early in 1959, beating him to a punch. Most of all, I think Lion trusted on his intuition, looking for another good Blakey seller. And Jazz Corner, showcasing Blakey as genial jazz ambassador and his Messengers as exciting young bloods, did sell properly. Lion had to make choices for his complete roster of artists all year round. He shelved the excellent November ’59 session of Africaine (released in 1981) at the expense of Big Beat. Flooding the market is of no use.

Even if you’re prepared for Blakey’s big beat, hearing his band in full bloom is still an exhilarating experience. The session is restored beautifully, coming at you as if the Messengers are playing in your room. Four tunes, Close Your Eyes, Mobley’s Hipsippy Blues, M&M and Just Coolin’, would appear on At The Jqzz Corner Of The World. Timmons’s Quick Trick and Jimerick (unknown composer) are previously unreleased tunes. Jimerick is especially noteworthy, an uptempo cooker with a jump blues-feel and catchy stop-time theme that showcases bright, energetic solo’s by Timmons, Morgan and Blakey.

Just Coolin’ is vintage Messengers, Blakey pushing the band at paced mid to up-tempos with driving shuffles, typically driving his men through hard bop avenue with the Blakey Press Roll and various lush and greasy accents and rim shots. Perhaps the records lacks an epic tune and perhaps there’s one tenor sqeak too many, but how the elegant and classy Mobley has always maintained both drive and his cool in front of Blakey is one of the joys of this particular line-up. Morgan is all chutzpah, grease, fire. At times, his notes deliriously dance on the changes, solidly landing on their feet, which combined with Morgan’s bright and brazen tone is a very gratifying experience.

The Jazz Messengers were about honesty, blues and what Mobley alluded to in his quote of a famous, emblematic Ellington piece during Close Your Eyes. There’s plenty of that on Blue Note’s latest “vault” release.