Get ready for a post bop bomb by the powerhouse trio of organist Eddy Louiss, guitarist René Thomas and drummer Kenny Clarke. 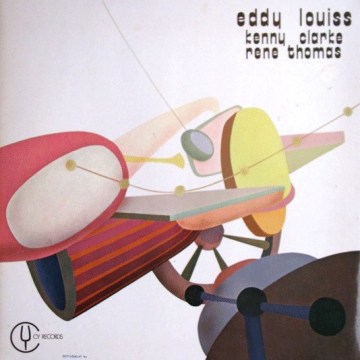 Side A:
No Smoking
You’ve Changed
Don’t Want Nothin’
Side B:
Nardis
Blue Tempo
Groovin’ High


Eddy Louiss came up in the early sixties as a pianist in Paris, France, soaking up the music of American expatriate legends like Bud Powell, apprenticing in modern jazz like like-minded, passionate European jazz freaks as Daniel Humair, Rein de Graaff, Pierre Courbois, Gunther Hampel. Louiss mainly focused on playing the Hammond organ in the mid-sixties. His thorough grasp of the bebop language is evident. That, in itself, is notable. The great ones in the USA – pioneer Jimmy Smith, Don Patterson, Jimmy McGriff, Groove Holmes, Eddie Baccus, Lonnie Smith, Melvin Rhyne – mastered essential bop melodies. The average soul jazz organist would perhaps include a bit of bop in his song book, but would prefer to play a blues lick like Now’s The Time instead of Scrapple From The Apple. Nothing wrong with that, long live the groove. Just not bebop scales and the integration of upper intervals in the harmonic groundwork of standards.

Louiss was no stranger to the golden feathers of Bird. However, there’s more to Eddy Louiss, who was born in Paris in 1944 to a French mother and a father from the colony of Martinique. His father was a trumpet player and enrolled young Eddy in his band, who was exposed to all kinds of exotic rhythm that underlined the repertoire of his dad’s popular music outfit like the rumba, cha cha cha and paso doble. In Paris, melting pot of cultures, skin colors, scents, fashions… Louiss accompanied French chanteurs and chanteuses. In later life, Louiss played duets with such diverse personalities as pianist Michel Petrucciani and accordionist Richard Galliano. Undoubtedly, this colorful background contributed immensily to the multi-faceted, original playing style of Eddy Louiss.

The association of Louiss with tenor saxophonist Stan Getz in the early 70s put the French organist squarely in the limelight. Getz formed one of his finest but underrated groups of his career, also including drummer Bernard Lubat and the Belgian guitarist René Thomas. The group recorded the outstanding live album Dynasty in 1971. By then, Louiss had been cooperating with René Thomas for a number of years, a very fruitful bond, especially in combination with Kenny Clarke, expatriate drummer in Paris, France since the 50s, legendary inventor of bebop rhythm, major inspiration for European musicians to push their boundaries.

Louiss, whose bass figures are fat-bottomed and hi-level at any pace, fast or slow, and the group play a heavy Nardis. It definitely spells 1968 and one imagines Brian Auger scratching his chin, relieved he’s playing at another festival. Nardis features typical long, boppish Louiss lines, swirling in directions to the Near-East and Carribean Islands. Kenny Clarke, effortlessly and with abundant detail underpinning the driving force of the Louiss organ, is hors category. The way his concise solo segues back into the Spanish-tinged outro of Blue Tempo is so good it makes you laugh.

You’ve Changed features extraordinary playing by René Thomas, a guitarist of note who, let’s be honest, would be counted among the greats would he have been of American descent. His story of You’ve Changed is intense. No doubt in my mind that the guitarist from Liège, Belgium knew the lyrics by heart… You’ve changed.. that sparkle in your eyes is gone… your smile is just a careless yawn… you’re breaking my heart… you’ve changed… you’ve forgotten the words, I love you… each memory that we’ve shared, you ignore… every star above you, I can’t realize you’ve ever cared… you’ve changed… you’re not the angel that I once knew… no need to tell me that we’re through… it’s all over now, you’ve changed… Thomas reflects the lover’s resignation, but his double time, staccato and poetic phrases add a layer, they’re hitting the spot, bidding farewell but adding the afterthought that the lady is worse off without Monsieur Thomas.

Eddy Louiss is more level-headed. His explosive solo says: ok, so it’s over. Soit! Gotta move on! Period. Their stories comprise one of the nicest contrasts of this imposing set of organ jazz.