It is, indeed, tenor saxophonist Billy Mitchell, delivering a mellow mainstream album with more than a few surprises. 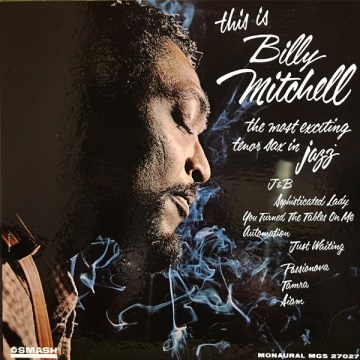 Side A:
J&B
Sophisticated Lady
You Turned The Tables On Me
Passionova
Side B:
Tamra
Automation
Just Waiting
Siam


The tenor saxophone is a special cat. Essential jazz instrument since the introduction of its potential by Coleman Hawkins, extension of the body of popular honking men like Big Jay McNeely, fulfilling the attractive role that would later only be surpassed by the guitar in rock & roll. Very saxy… The tenor sax is the woman with guts, Lauren Bacall firing one-liners, high ball leaning in her lean fingers, it’s the woman with curves, Raquel Welch bursting from the screen, half-naked and whip in hand… It’s the boy in the hood, dunking day and night on the square, and it’s Killer Joe, stepping from the board of his Cadillac, right in front of Birdland… The burning of rubber on a dirt road. Biceps and beer belch all in one. And smoke, don’t forget the smoke…

The tenor saxophone gels particularly well with the toms and ride cymbal of the drums, the middle register of the piano. Its sound burst out of the big bands and plays a pivotal role in the small ensemble setting of the 50s and beyond. It was the chosen instrument for many of the burgeoning reed men that followed the bright light of alto saxophonist Charlie Parker. In the slipstream of the giants – Hawkins, Lester Young, Sonny Rollins, John Coltrane – a slew of great stylists emerged. A sample of last year’s review pages of Flophouse Magazine reveals the names of tenor saxophonists Cannonball Adderley, Jerome Richardson, Hank Mobley, Johnny Griffin, Eddie Chamblee, Oliver Nelson, Jimmy Forrest, King Curtis, Clarence Wheeler, Buddy Terry, Harold Land, Wayne Shorter and Hank Bagby. Suits all mainstream jazz tastes!

And now Billy Mitchell: dark horse coming in from the stretch, a thoroughbred bound for a solid run on the racetrack of Flophouse, place your bets, keep your eye on the tote board, 9 to 2 shot, there he comes, there he comes… run! goddamit! run!… bingo. Born in Kansas City, Missouri, across the border line from Charlie Parker – who saw the light in Kansas City, Kansas – raised in Detroit, city of countless outstanding jazz artists, Mitchell apprenticed at the Blue Bird Inn, sharing the stage with incoming modernists like Miles Davis. He was a long-time member of the Dizzy Gillespie and Count Basie big bands. Mitchell maintained a special relationship with trombonist Al Grey, with whom the bop-oriented tenorist released a number of albums in the early 60s.

Bonafide leadership dates were scarce. Snap Your Fingers on Argo was the first in 1962, This Is Billy Mitchell followed soon after that year and A Little Juicy was the final solo album by Mitchell featuring Thad Jones in the sixties – 1964. Both albums were released on Smash, subsidiary of Mercury Records. His next record came out in 1977. For reasons unknown, Mitchell dropped out of the scene in the 80s, coming out of hiding only occasionally, for instance with singer Deborah Brown and Rein de Graaff Trio during Vervolg Cursus Bebop in The Netherlands in 1991, the legendary series of lectures and performances with American legends and unsung heroes that was organized by pianist Rein de Graaff. The face of death finally appeared in Mitchell’s rear view mirror in 2001.

And now This Is Billy Mitchell: epic sleeve, smoke, pockmarked face of ruminative jazz man, graceful lettering that says… Mitchell is the most exciting tenor sax in jazz… Well, hyperbole reared its ugly head… Nonetheless, Mitchell is a real good’n, offering mellow mainstream jazz, a warm, full-bodied tone and smooth phrasing that keeps us fairly hypnotized in our easy chair. Mitchell fluently embeds the weathered artistry of the great swing tenor men in his background of bebop. He carries his original composition J&B, a smooth, smoky song that bounces merrily behind Mitchell’s relaxed but imposing, big-sounding phrases, Buddy Tate-ish, Jimmy Forrest-ish, you name it. Simply wonderful.

A similar swing era-smoothness instills the mid-tempo You Turned The Tables On Me and the ballad Sophisticated Lady, once a showcase for Harry Carney’s pioneering, booming baritone sax and a demonstration of skilled artistry by Mitchell here, whose proficiency provides wholehearted support for understated drama and imaginative, fully articulated ideas: the mark of a great jazz man. Boppish swing infuses a surprising set of rarely performed compositions: Gene Kee’s Siam, Melba Liston’s Just Waiting, John Hines’s Passionova. Automation is an original composition by trumpeter Dave Burns, the album’s most furious affair.

Obviously, the unusual sound palette of This Is Billy Mitchell is a big part of the attraction. Piano by Billy Wallace, the Wild Bill Davis-type organ injections and unobtrusive background of Clarence “Sleepy” Anderson, the ringing, balanced notes and tones of early-career Bobby Hutcherson all together now for 1/3 part of the album. The sprightly and pesky trumpet of Dave Burns and husky tenor of Billy Mitchell tiptoeing on the easygoing bounce of bassist Herman Wright and drummer Otis “Candy” Finch. The variety of piano/vibraphone, vibraphone/piano. It somehow works, a meshing that serves as the backdrop to very enjoyable tenor playing by Billy Mitchell.